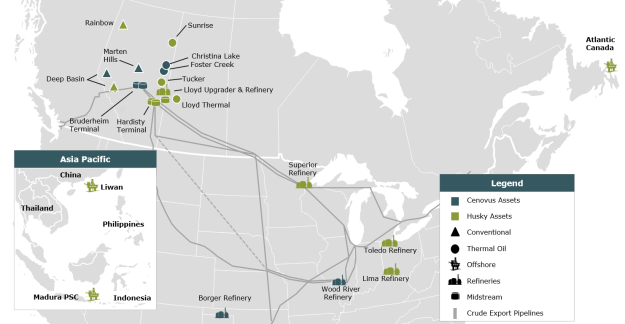 The two Calgary-based companies each held special shareholder meetings to vote on the $3.8-billion all-stock buyout.

The endorsement by investors of both firms was resounding, with more than 90 per cent of votes cast in favour of the acquisition.

The backing of shareholders leaves regulatory approval as the deal’s last major hurdle. The surprise transaction, announced in October, is expected to close in the first quarter of 2021.

It comes at a pivotal time in Canada’s energy sector as the collapse in oil prices and global pandemic puts pressure on the oil and gas industry.

The combined company would create the third-largest Canadian oil and natural gas producer by total production.

“These past few months have been challenging ones for our industry but today there is significant cause for optimism,” he told shareholders. “I’m confident our combined company will be stronger, more competitive, efficient and profitable than either company on its own.”

Combining the companies will create annual savings of $1.2 billion, the companies said, largely achieved within the first year and independent of commodity prices.

However, workforce reductions are expected, another blow to Alberta’s oil and gas sector, which has been hard hit by job cuts in recent months.

A Cenovus spokesman has said the company plans to trim between 20 and 25 per cent of the 8,600 employees and contractors currently working at the two companies – potentially more than 2,000 workers.

Frank Sixt, a director of Husky Energy, said the combined company will be more sustainable.

“The synergies between Husky and Cenovus are clear,” he told shareholders. “We share many similar values and priorities.”

Sixt said the company is optimistic about its future.

“Husky has built a strong foundation over more than 80 years,” he said. “From our humble beginnings as a small refinery, Husky developed a diverse, high quality asset base; today we are ready to take the next step to create an even more resilient and stronger Canadian integrated energy leader.”

The all-stock transaction was cast as a $23.6-billion deal by the Calgary-based companies by including the value of Cenovus and net debt, reported at the end of the second quarter as $8.2 billion for Cenovus and $5.1 billion for Husky.

The combined company will operate as Cenovus Energy and remain headquartered in Calgary.
www.cenovus.com
https://huskyenergy.com