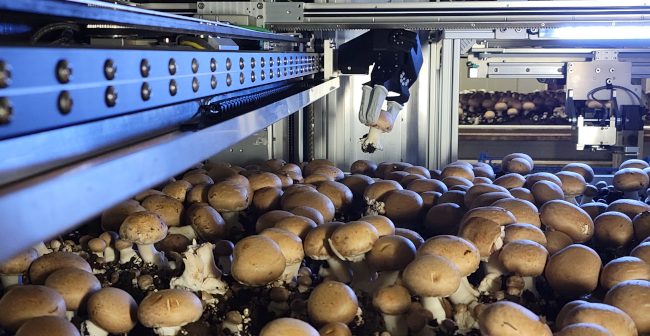 Amid thousands of mushrooms, Mycionics’ robotic harvester can spot and pick individual mushrooms without damaging them.
(Photo credit: Mycionics)

Despite being one of the more pedestrian vegetables, the mushroom is at the center of a growing crisis in the global agricultural market. On the one hand, they are an increasingly popular. Market analysis firm, Grand View Research pegged the global mushrooms market at US$46 billion in 2020.

And the industry is expected to expand steadily, at a compound annual growth rate of 9.5%, as health-conscious consumers turn to non-meat protein alternatives.

On the other hand, the industry has been in the grips of a protracted and acute labor shortage, which has only been exacerbated by the COVID pandemic.

“The problem around the world is that it’s hard to get people to do this job,” says Michael Curry, CEO of Mycionics, a Putnam, ON-based robotics firm that recently emerged from stealth mode to unveil its fully automated mushroom harvesting system. “It’s repetitive, it’s hard on the back and it’s in high humidity rooms.”

“In Canada, there is about a 20 percent labor gap and there is a 40 percent turnover per year,” he adds. “And it takes six months to train someone properly so they don’t damage the mushrooms caps.”

Established in 2014 by mushroom farmer, Murry Good, Mycionics – its name a portmanteau of mycology (the study of fungi) and bionics – began as a research project when Good approached the engineering department at Western University in near-by London, Ontario. Seven years later, the company says it has fashioned an industry-first, end-to-end automation solution that will be a break-through for this billion dollar industry.

“Today, we have a team of 17 engineers in our lab, which is actually based on a mushroom farm,” Curry says. “We’ve been working on an autonomous robotic solution that can basically fill the roll of the humans who aren’t interested in the back-breaking, repetitive agricultural work involved.”

At first blush, a solution might seem straight forward, but the realities of fungi harvesting are surprisingly complex. For one, the species of whitish button mushroom that makes up 60 percent of the total world market, Agaricus bisporus, grows exceedingly quickly.

Cultivated in composted and pasteurized wheat hay and manure, A. bisporus spore will fully form a web-like lattice called mycelium within two to three weeks. The compost is then topped with a 2-inch casing layer of peat moss, which sparks the formation of pin-sized fruiting bodies.

Triggered by moist air and low CO2, the fruiting bodies will grow at approximately 4 percent per hour, once they break through the casing layer, and will double in size over 24 hours. While that’s great for crop yield, it does mean that the mushroom’s button stage, which makes up 80 percent of the A. bisporus market, can pass by quickly if they aren’t harvested in time.

Left to mature and expose their gills, button-sized A. bisporus will “over-grow” to become second grade mushrooms, known in the trade as “utilities”. Consequently, workers need to repeatedly scan the large, tightly packed trays of variously sized mushrooms to pick only those that are large enough but haven’t yet enter the reproductive stage.

Adding to the complexity are the tight quarters inside the atmospherically controlled grow houses and the relative fragility of the crop itself, Curry says.

“Mushroom farms are typically designed with two aluminum racks per room, that are 100 feet long and stacked six to seven layers high like bunk beds,” he explains.

In addition, mushroom don’t grow uniformly like wheat but instead sprout in waves called flushes or breaks. A complete mushroom crop cycle will typically have three flushes, each lasting three to five days. Since grocery retailers want mushrooms of a specific size – 45 to 55mm so as to neatly fit eight per pack – harvesters are engaged in near constant monitoring and picking activity.

Finally, properly picking a mushroom requires workers to quickly but gently twist the mushroom free from the casing layer, cut the stem to remove the roots and place them into weighing trays without bruising them.

Stacking up these complications explains why automation has largely been absent in the industry, says Mycionics CTO, Stefan Glibetic, who has been with the project since before earning a masters in engineering at Western University.

“In the industry, we were met with a lot of skepticism, and told that it couldn’t be done,” he says. “But we were very determined. We felt we could take a fresh look and apply more modern technology to a problem that’s been long-standing and unsolvable.”

Mycionics robotic system is composed of three separate machines – the lifter, the harvester and the packer – which work in concert. Attached to one end of an industry standard aluminum rack, the lifter transports the harvester unit between shelves as needed. Once delivered, the harvester moves along the 100-foot shelves on rollers, using its 3D vision system to scan the mushroom bed beneath it in sections.

“The harvester scans the mushroom bed to determine the size, shape and location of the mushrooms,” Glibetic explains. “With input from the farmer as to the desired size, the harvester machine then builds a plan of how to find the mature mushrooms and harvest them. Based on conditions in the room, such as the estimated growth rate, the plan also allows the machine to optimize what and when to pick and minimiize time spent in areas that aren’t ready yet.”

With the digital map built, the harvester then switches into picking mode, operating similar to a gantry robot. To position its custom designed, three-fingered gripper over a target mushroom, the harvester rolls forward and back while a motorized linear slide, perpendicular to the harvester’s travel, moves the gripper side to side. The gripper then gently grasps and picks the mushroom via a carefully choreographed sequence that changes with each mushroom.

“Determining the right way to pick a mushroom was a big portion of our system,” Glibetic says. “Every parameter that we measure and take into account is on a per mushroom basis including all the mushrooms around it. This allows the system to harvest mushrooms rapidly without damaging the mushroom being picked or any of the ones around it.” 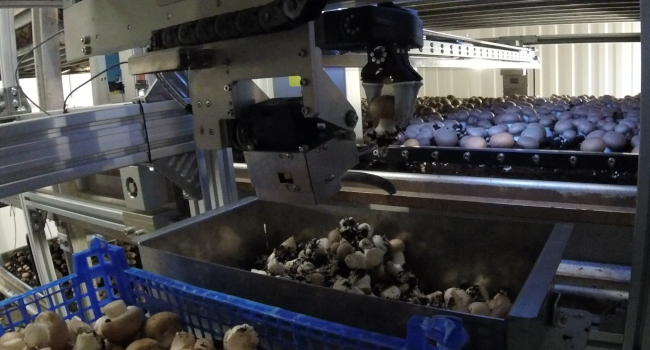 Once picked, the Mycionics system’s three-fingered gripper delivers mushrooms to the packer unit which cuts the stem and places them in a weighing basking.
(Photo credit: Mycionics)

Once picked, the mushroom is then delivered to the packer, which rolls along the outside of the growing rack in step with the harvester. It’s job is to trim the stem and deposit the mushroom in a weighing tray.

“Our system is capable of scanning 150,000 mushrooms per hour, or 2,500 per minute, and the data we collect with our system is helping in various ways,” Glibetic says. “We have future plans to help the industry as a whole, such as detecting various problems that were simply too difficult to detect before due to the overwhelming amount of data human growers are currently presented with.”

Currently, Curry says the system is poised for its final real world test. Over the next 10 month, the company plans to build eight machines installed at two Ontario mushroom farms, four at one and four at the other.

“We now feel we have a system that is working well enough to actually perform on these farms,” he says. “We will be putting together a business case comparing our system to human picking and whether we will be able to achieve the yield increases we believe we can get by harvesting around the clock.”

Curry says Mycionics will roll out its machines first in Ontario, which makes up more than half the Canadian market, and then widen its availability to high labor-cost areas like Europe.

“Our plan is to sell a picking service where we are partnering with farms long term,” he says. “We’ll deploy the machine and get paid for what we pick, provided it meets quality standards. We don’t want to sell the system because we know the technology is only going to get better.”
https://mycionics.com