My goal for attending SolidWorks world this year was to understand how Dassault Systèmes was planning to transition SolidWorks from a desktop system to a pure cloud-based software.

Dassault has hinted for sometime moving SolidWorks to the cloud isn’t a matter of if but when, and I wanted to understand what were the pitfalls anticipated with the transition. It’s fair to say most major software companies today with an eye to the future, have a cloud base strategy.  {nomultithumb}

Cloud-based services promise to reduce software license costs, be less reliance on IT staff, and have lower hardware spec requirements. Sounds great but is the technology mature enough yet?

Cloud CAD software utilizes WebGL, requires a browser and early adapters are not reporting joy with their experiences. 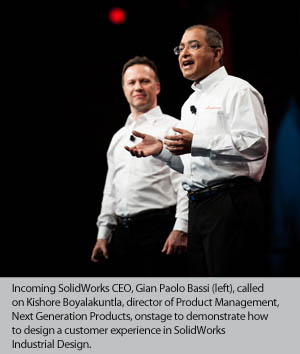 Day One of SolidWorks World started with the announcement of a new boss; outgoing CEO Bertrand Sicot introduced the new incoming CEO, Gian Paolo Bassi. Bassi set the tone of his vision for the company with a promise SolidWorks would embrace the future but reassured the faithful user base they would not abandon their core strengths.

He was head of Research and Development for SolidWorks before taking his new position, so he has had a direct hand in directing the future of the product.

Reassuring his audience Bassi stated, “What we are doing today is cemented around two pillars, we want to embrace the future but respect our legacy. One pillar is our desktop generation and we will keep putting innovation in this product.

“The other pillar is the cloud generation tied together by the 3Dexperience platform.” He went on to introduce a new SolidWorks cloud-based product, a tool for industrial designers called SolidWorks Industrial Design.

These 2 releases will lead the way into pure cloud based offerings from Dassault Systèmes targeting the SolidWorks user base.

As described in its news release; “Industrial Design allows designers to create complex shapes in 3D and add mechanical data directly to a model without changing product design software or environment.

Interestingly, the intent is to have all data stored on the Dassault cloud with no option for local storage.

Solidworks Industrial Design will be released in April and sold through resellers but it will be a subscription model only. Price wasn’t available at the time of this article.

Senior Director of  Product Management, Rich Allan was quick to acknowledge, currently world-wide Internet reliability wouldn’t facilitate a complete switch to a cloud platform and no short-term plans to halt development of their flagship desktop product was in the works. He told Design Product News, “Initially users will have a choice of either the desktop or the cloud-based version of Solidworks.”

When asked what were the compelling reasons a user would opt for the cloud platform if given a choice, Allan answered, “Annually upgrading to a new release is a concern raised by customers and can affect productivity for them whereas the cloud-based software is always up to date.”

Allan went on to say he expected the early adopters would likely be those with a need to collaborate with other designers. Cloud storage of files would mean regardless of location all designers are working from the same data set.

Allan also confirmed a pure cloud based version of SolidWorks will be a product offered to customers from Dassault Systèmes within the next 2 years.

The last major evolution in the CAD industry was in the mid-1990s with the introduction of 3D CAD on the Microsoft Windows platform. At the time, the large players running on Unix scoffed at the inferior Windows products but those that didn’t have a good Windows strategy gave up market share in the end.

I see the move to the cloud platforms in much the same way; in 1995 running SolidWorks on Windows 95 was painful. Other than the price, SolidWorks then wasn’t too exciting for a ProE or UG user, but it wasn’t too many years later we saw companies making the switch.

Cloud computing is here to stay and while not ready for the main stage yet, as Internet speeds and reliability improves the evolution is inevitable.

Neil Thomas (neil@onecad.com) is the owner and founder of OneCAD Solutions, a professional engineering company created in 2004 and based in Markham, ON.