SolidWorks World, the annual convention of Dassault Syst√É¬®mes SolidWorks users, held in Anaheim, CA, last month left me wondering if I was at CAD convention or at a weather forecaster’s convention. It seems that about every third sentence contained the word “cloud.”

In case you haven’t heard yet, “cloud computing” refers to a radical paradigm shift, wherein “The Cloud” refers to the huge cloud of computers that make up the internet. In this scenario, all your main applications and all of your data files will live on hosted servers.

Stop for a moment and think of the implications of this.

SolidWorks also envision a dual mode; you could buy an unlimited, open license (much like the current stand-alone mode) and/or you could rent occasional time on a metered basis.

Cloud computing can have a big advantage during collaborative design projects. There will no longer be a need to email files back and forth and hope that everyone is working from the same revision level, because everyone will have access to the same single file on the Cloud. The next release of

SolidWorks will contain the beginnings of this in that it will include Product Data Sharing (PDS). This will allow several users to simultaneously work collaboratively on the same file over the web, and it will also include automatic revision levels.

So far everything sounded all sweetness and light, so at a one-on-one interview with Jeff Ray (right, below), SolidWorks CEO, I played Devil’s Advocate. My questions and his answers are paraphrased below:
Q: What about data security? Will customers trust all of their proprietary data to a server “somewhere?”
A: Your own PC is probably the least-secure place there is. Hackers can get in, viruses can corrupt, hard drives can go bad, your building can burn down, and your own employees can steal or do damage. We were a victim of this a few years back when an employee of a sub-contractor programming company walked out with a CD containing our source code. The FBI caught him in a sting operation when he attempted to sell it to a competitor. Where do you keep your money, in a bank or under your mattress?
Q: What effect will this have on third-part developers? How can they sell an add-on, if there is nothing to add on to?
A: We are looking into having the third-party applications installed on our servers. As with the main applications you will either buy a full-time license or rent on a metered basis from the developer. We feel this will help the developers because it will potentially give them exposure to a much bigger market.
Q: What about your resellers?
A: We think they will be able to devote more time to selling and training because they won’t have to be involved with all the hassles of supporting installation and upgrade processes. 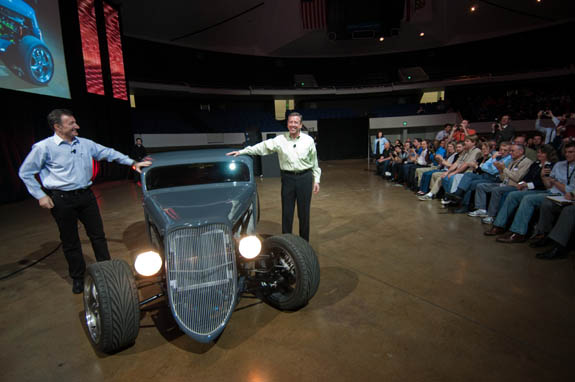 SolidWorks executives repeatedly emphasized their commitment to Cloud computing, including Bernard Charl√É¬®s (left, above), the Dassault Syst√É¬®mes president and CEO attending his first SolidWorks World. Mind you, they were equally quick to point out that it is not their intention to shut down the traditional local-machine concept until virtually all users have voluntarily switched to the Cloud. They foresee running in parallel for a number of years.

I’m so old that I can remember when the only computers were big mainframes that held all our applications and data, and we accessed them through dumb terminals.

Most people don’t realize that the P in PC stands for “Personal,” and when they were introduced they were touted as freeing us from the tyranny of being tied to a central computer system. We seem to be coming full circle.

When discussing this subject with a friend, he said somewhat wistfully “Yes, I guess the Cloud is eventually going to rain on all of us.” On the other hand, some rain isn’t always bad. Just ask a farmer or the administrator of a municipal waterworks system.

With all the recent emphasis on virtual prototyping I was intrigued by the fact that about half the exhibits in the vendor’s showcase involved products for turning virtual parts into real ones. 3D printers were about as common as CNC programs.

Most of the remaining vendors were showing software add-ons, with very few hardware vendors. These days, most hardware that is good enough to run Windows is good enough for CAD. It’s going to be interesting to see how the Cloud affects future shows.

Bill Fane (bill_fane@bcit.ca) is an independent software reviewer and retired mechanical engineering instructor at the British Columbia Institute of Technology.