Prior to every year’s event, Challenge organizers agonize over how difficult to make the problem the students are asked to solve.

But as the students began to demonstrate their devices at Scarlett Heights Entrepreneurial Academy in Etobicoke on the afternoon of May 14th, it quickly became apparent that they had been presented with a Goldilocks challenge – not too hard and not too easy.
{nomultithumb}
Students from 19 west Toronto middle schools were asked to design and build fluid power devices, actuated by water-filled syringes to pick up a wooden cylinder and place it on one of three shelves. They were evaluated on a set of criteria including the number of cycles completed and the quality of their design portfolios.

Twelve of the 19 schools were able to get their devices to complete at least one “hands-off” cycle and six of the remaining teams were able to demonstrate success in achieving combinations of rotating or elevating their devices or gripping the cylinder.

There were two winners at this year’s Challenge. Spectrum Alternative Senior School took the overall award based on how well their device performed and the quality of their portfolio. The students from Beaumonde Heights Junior Middle School won for best portfolio, which was awarded for the first time this year.

The Challenge, which is a partnership of the Canadian Fluid Power Association and the Toronto District School Board, is intended to provide Grade 8 students with hands-on experience building a mechanism with real world applicability and to open their eyes and those of their teachers to the world of technology careers and, in particular, careers in fluid power.

At a minimum, the organizers hope that the Challenge will encourage students to select more mathematics and science courses in their high school curricula to keep their options open for technology-based post-secondary studies. The teams are gender-balanced with two girls and two boys on each.

The Toronto edition of the Canadian Fluid Power Challenge began in 2001 as the Hilltop Challenge.  This year marked its return after a two-year hiatus due to issues beyond the control of the organizers. 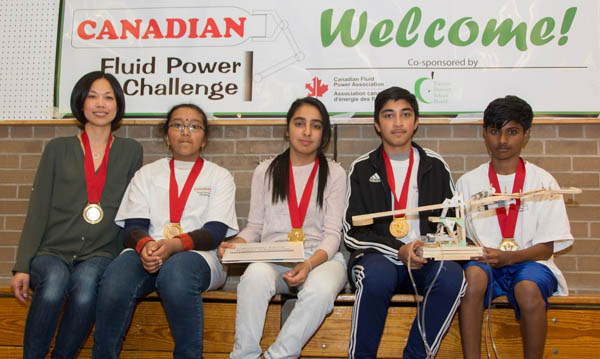