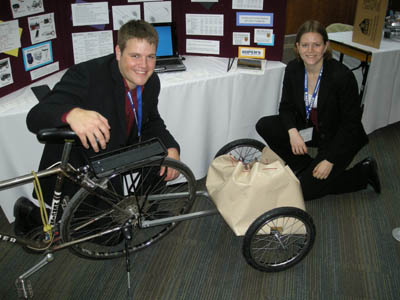 HAMILTON, ON - Getting more commuters to cycle to work was the motivation behind the invention of a collapsible bicycle trailer designed by two fifth-year mechanical engineering and management students at McMaster University.

“More people would commute by bicycle if they had a convenient, safe and secure way to transport things on their way to and from work, but towing an empty bicycle trailer can be very cumbersome,” said Kettel. “Having more cyclists and fewer cars on the road would be better for the environment and for people’s health.”

Research by the two inventors showed that while there were many fixed bicycle trailers on the market there were none that could conveniently fold out of the way while remaining attached to a bike. One study they found showed that nine percent of recreational cyclists in Toronto cited the inability to carry things on a bike as one of the reasons that they do not cycle to work. The pair designed their trailer to give commuter cyclists a convenient way to transport large numbers of goods or bulky items.

“Take groceries for example,” said Minkhorst. “You can only carry so many groceries without a trailer, and larger items are difficult to deal with. Trailers currently on the market pose security problems and can be very inconvenient when not in use unless they are removed. With our trailer, you can make a stop at the store on your way home from work and pick up larger items such as a 24-pack of toilet paper, without having to plan your entire day around it.”

The collapsible carrier is designed so that the rigid base folds inward when unlocked.  Pins for both wheels are then released by the rider and the whole assembly folds together and rotates upwards to sit conveniently on a rear bike rack. The trailer is lightweight and can be securely locked.

The idea was originally conceived by Kettel for an industrial design class.  Kettel then asked Minkhorst to pair up with her to develop a prototype for a fourth-year design project. The two students were encouraged to enter the trailer into the competition. 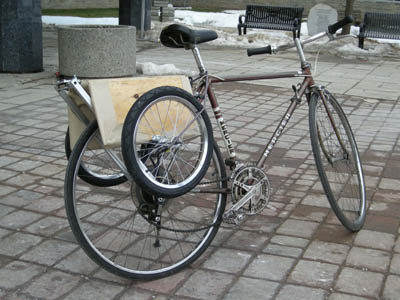 Both plan to graduate in the spring and are deciding if they will turn their invention into a business. They are getting encouragement to do so from fellow students, professors and potential funders.