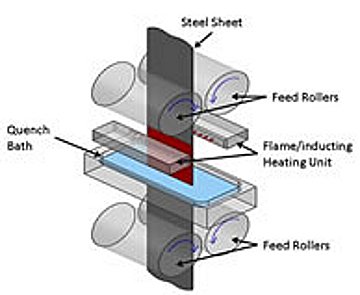 According to Suresh Babu, associate professor of materials science and engineering at Ohio State, and director of the National Science Foundation (NSF) Center for Integrative Materials Joining for Energy Applications, Flash Bainite could provide a significant boost to the fuel economy of vehicles without sacrificing safety.

“Steel is what we would call a ‘mature technology.’ We’d like to think we know most everything about it,” Babu is quoted in a press released issued by the university. “If someone invented a way to strengthen the strongest steels even a few percent, that would be a big deal. But 7 percent? That’s huge.”

Using the process, the Ohio State researchers successfully boosted AISI 8620 steel alloy to a yield strength of 1280 MPa and a tensile strength of 1600 MPa but with ductility (the amount it can crumple before breaking) of 9.9 percent. Those numbers surpass those of the hardest martensitic AHSS steels, which top out at 1400 to 1500 MPa UTS. In addition, the Flash Bainite-treated steel showed 30 percent greater elongation than martensitic steel.

Contrary to traditional tempering, which may take hours or days to complete, Cola’s Flash Process rapidly heats sheet steel to 1100 degrees C and cools it in a liquid bath. The resulting alloy contains a complex mixture of martensite and bainite microstructure, along with carbide compounds, electron microscopy revealed. Because the Flash process can be completed quickly, it can also be applied selectively to specific regions of steel sheet.

Although the Ohio university researchers have confirmed the validity of Cola’s flash process, they are in the process of working out the physics behind how it works, so the process can be refined and improved. In the meantime, Cola currently markets the steel for use in automotive applications and as a light-weight armor for military vehicles.
http://researchnews.osu.edu
www.bainitesteel.com