Constructed in a matter of weeks, Tesla pins its hopes of reaching 5k-production goal on a massive open-air structure.

With the photo taken by Musk and posted to Twitter, it’s evident the tent is huge.

Constructed in a matter of weeks, Tesla pins its hopes of reaching 5k-production goal on a massive open-air structure.

In an effort to meet his goal of producing 5,000 Tesla Model 3’s a week, tech CEO  Elon Musk has built a tent-like structure the company has dubbed “Factory 2.0”

While this technically isn’t surprising since Musk announced a “new general assembly line,” made with “minimal resources,” on June 16, the speed with which the facility was constructed certainly is.

According to multiple Twitter conversations with journalists, Musk stated that both the tent and the accompanying assembly line took employees three weeks to put together. He went onto claim that this new open structure is “better” than the traditional factory setting Tesla currently works out of, but never elaborated as to why.

In going through city documents, reporters from Ars Technia were able to find out that the tent has only been “provisionally approved for six months, but no formal building inspections have been scheduled.”

Manufactured by a company called Sprung, the open-air facility is described as a “patented membrane structure,” rather than your regular boring tent. According the Ars Technica story, city documents describe each structure as 53-feet high and 150-feet long, with multiple membranes connected by aluminum framing. 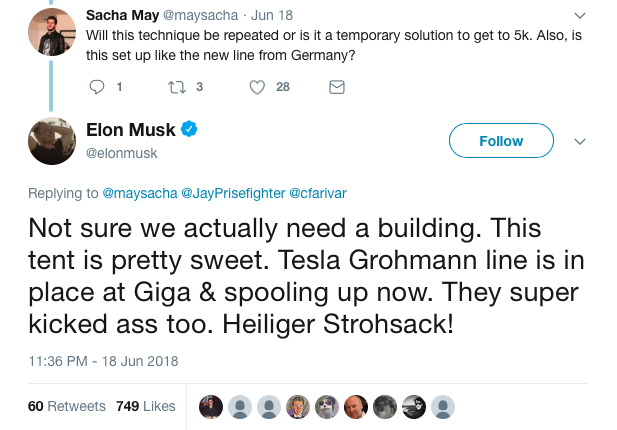 Whether or not we’re witnessing the future of factory technology or just the whims of a tech billionaire remains to be seen.