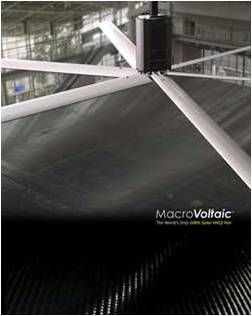 –
Solar energy has been called the wave of the future. MacroAir Technologies is surfing that wave with the introduction of the MacroVoltaic fan. Receiving the highest certified rating, the MacroVoltaic fan is the only solar high volume low speed (HVLS) industrial fan on the market.

Established by Walter Boyd, the inventor of HVLS commercial fan technology, and a family-owned company since its inception in 1995, MacroAir combines technology with a unique application of the laws of physics to produce air-circulating fans for use in large industrial, commercial, and agricultural buildings.

HVLS fan technology is unique in that it is designed to generate a column of air that flows down to the ground and outward 360 degrees. This large, slow moving air mass moves throughout the space, mixing and circulating air more efficiently without generating the noise and dust created by other industrial fans. And because MacroAir fans are already far more energy efficient than standard industrial fans, the conversion to solar energy has been a natural progression for an already innovative use of technology.

The MacroVoltaic air movement system includes the HVLS fan with an attached controller, a specialized component that converts power from the solar panels, as well as the solar panels, which have a 20-year warranty, standard remote control, an optional auxiliary power supply, and an optional battery backup.

Used as a stand alone solar fan, the MacroVoltaic system is ideal for consumers who are looking for energy alternatives or are unable to run traditional AC power sources to remote locations and who are utilizing the fans primarily during daylight hours.

When used in conjunction with auxiliary backup, the MacroVoltaic fan can be used even when sunlight is not available to power the system. Additionally, the excess wattage produced by the battery backup is used to charge the batteries and store the energy for use at night or during cloudy weather. When both the auxiliary and battery backup are utilized, the batteries are still charged through the solar panels, but the auxiliary power ensures that there will always be a power source available to run the system.

In keeping with the company’s assertion that it offers the “greenest fans on earth,” the energy efficiency of the MacroAir line of fans not only provides its consumers with significant savings, but it also provides incredible benefit to the environment. By reducing energy consumption and the amount of pollutant emissions, using solar power increases the quality of life, as well as the sustainability of the natural resources of our planet.