The science of the 2014 World Cup soccer ball 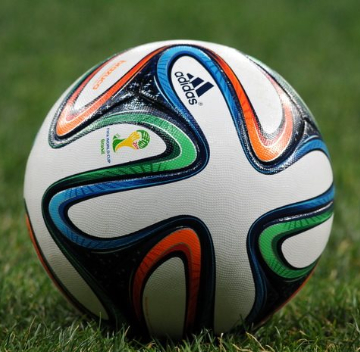 According to physics experts at the University of Adelaide, the aerodynamics of the 2014 World Cup soccer ball — called Brazuca — will make it more predictable yet also harder to bend than the much maligned 2010 Jabulani ball.

Unlike its predecessor, dubbed the ‘beach ball’ due of its erratic flight path, the Brazuca is rough, aerodynamically speaking, in that it has deep grooves similar to the original 32-panel ball, says Professor Derek Leinweber, professor of Physics in the University’s School of Chemistry and Physics.

“The Jabulani was much smoother than the Brazuca with smaller grooves and ridges across its surface,” he says. “That meant the ball had to be moving much faster before the airflow around the ball changed from smooth to turbulent. As this shift to turbulent airflow occurred at high speeds, the ball could make some pretty erratic movements on the way to the net.”

“In contrast the Brazuca, with its deeper grooves, hits that turbulent air flow at a lower speed with the result that the ball is much more predictable. In many ways, it’s a return to the aerodynamics of the old 32-panel ball.”

Professor Leinweber and PhD candidate Adrian Kiratidis have been investigating the likely performance of the new ball by matching up the physics of airflow with available wind tunnel data and video of the ball’s movement.

Kiratidis says he believes players taking hard and fast shots in this World Cup won’t find the Brazuca as easy to bend into the net as they did with the Jabulani.

“Keepers facing players of the calibre of Messi, Cristiano Ronaldo or Neymar are going to be glad that it’s Brazuca coming at them rather than Jabulani,” he says.
www.adelaide.edu.au