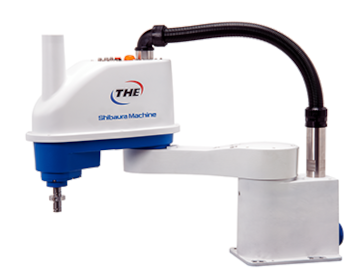 tributor, TM Robotics, announced it will show off Japanese robotics firm’s latest industrial models at the Assembly Show 2022 in Rosemont, IL in October. Models on display will include THE600 SCARA robot. Built on Shibaura’s THE400, the THE600 features improved synchronization and tracking precision, the company says. The model will be exhibited with Shibaura latest robotic controller, the TS5000.

According to Shibaura, the TS5000, compared to previous controllers, has been engineered for the modern factory in that it provides three times faster position cycles. Moreover, its data transmission has been enhanced to enable vibration analysis for smart maintenance.

In addition to the THE600 SCARA, TM Robotics will demonstrate Shibaura’s TVL700 six-axis model. The compact TVL range is vertically articulated and features an aluminum extrusion cross section to reduce the weight of the robot without compromising on strength or performance.

“The TVL700 demonstration is an ideal example of how Shibaura Machine robots can integrate seamlessly with other manufacturing technologies,” explained Nigel Smith, CEO and president of TM Robotics. “The robot will be exhibited in a parts handling application, an area that requires machines, software and other devices to collaborate in real-time. The robot will communicate with SICK’s vision system to demonstrate the fast cycle times that can be achieved with state-of-the-art robotics and intelligent software.”
www.tmrobotics.com