U of T-developed sponge removes oil droplets from wastewater 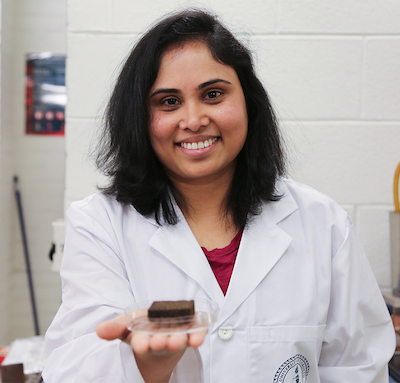 University of Toronto PhD student, Pavani Cherukupally shows off the sponge, designed to clean oil from industrial wastewater, she spearheaded the development of in conjunction with U of T chemists and other researchers. (Photo credit by Kevin Soobrian)

Researchers at the University of Toronto announced the development of a micro-cellular foam or sponge that can remove oil droplets from wastewater in as little as 10 minutes and with 90+ efficiency. Spearheaded by U of T grad student, Pavani Cherukupally, the oil-loving sponge can also be re-used after wringing it out and cleaning it with a solvent.

“Oil extraction operations such as hydraulic fracturing, or fracking, produce nearly 100 billion barrels of oil-contaminated wastewater each year,” says Chul Park, a professor in the U of T’s department of mechanical and industrial engineering. “Because the oil is in the form of tiny droplets rather than a large oil slick, we can’t use the same strategies we would use to clean up a surface spill.”

Drawing on Dr. Park’s expertise in microcellular foams, Cherukupally modified a common polyurethane foam such that it could remove 95 percent of the oil in test samples. While effective, that foam took too long to make sense in a commercial operation and was also highly dependent on the wastewater’s pH being relatively neutral.

“The optimal pH for our system was 5.6, but real-life wastewater can range in pH from around four to 10,” says Cherukupally. “As we got toward the top of that scale, we saw removal drop off significantly, down to maybe six or seven per cent.”

To improve performance, Cherukupally tweaked the surface charge, hydrophobicity, and multiscale roughness of the polyurethane and partnered with Geoffrey Ozin’s chemistry research team at U of T to coat the foam with nanocrystalline silicon, to create a surface-engineered sponge with a specifically tuned critical surface energy.

As a result, the current prototype removes more than 92 per cent of the oil in just 10 minutes and is effective over wider pH range. The team was also able to re-use the sponge prototype 10 times without degrading its performance.

The researchers say next steps will include working with Natural Resources Canada to scale the technology and adapting it for salt water to clean up marine oil spills. In addition, the team is working with Fisheries and Oceans Canada to focus more specifically on marine spills in low-temperature environments.
www.utoronto.ca