While the U.S. military would like to be able to 3D print replacement parts on or near the battlefield, Fused Filament Fabrication (aka FDM) additive manufacturing isn’t up to the job, say U.S. Army researchers. The parts produced aren’t strong enough to endure the rigors of combat. At the same time, 3D printers that do produce high strength parts are too large and require too much power to be feasible.

To overcome the problem, army researchers have engineered a multi-polymer build material that can be run through low-end FFF-based machines, but create much stronger and mechanically robust parts.

According to Dr. Eric D. Wetzel, the research area leader for Soldier Materials at the U.S. Army Combat Capabilities Development Command’s Army Research Laboratory, their filament combines ABS and polycarbonate to produce an inexpensive and simple-to-make filament that is stronger than either material on its own. 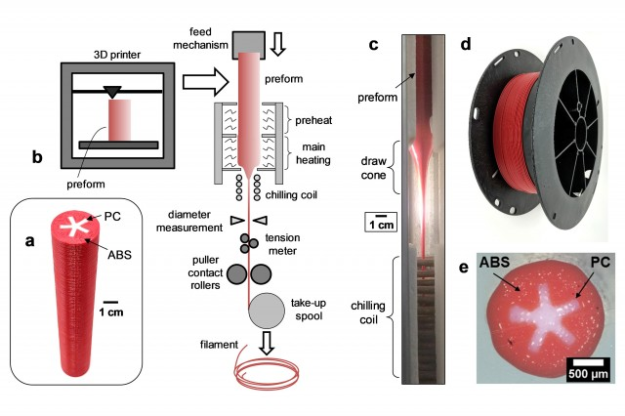 To make the filament, the researchers essentially 3D print a ABS pre-form with a star shaped polycarbonate core. The cylindrical slug is then run through an in-house designed thermal draw process to create a filament that can be used in the same FFF 3D printer used to create the pre-form. Parts made from this dual material filament are then annealed between the glass‐transition temperatures of ABS and polycarbonate.