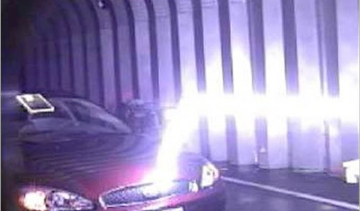 Engineers at the U.S. military’s Armament Research, Development and Engineering Center (ARDEC) at the Picatinny Arsenal in New Jersey announced that they have successfully tested, in essence, a lightning bolt weapon. Dubbed the Laser-Induced Plasma Channel (LIPC), the system is designed to destroy conductive targets such as an enemy vehicle or unexploded ordnance.

To direct the seemingly random nature of lightning, the system uses a high-powered laser beam to ionize air molecules and create a conductive plasma channel or tunnel through the surrounding insulating air. Once the electric blast reaches its intended conductive target, it jumps to it as a path of least resistance to ground. The result is a pulse with intense, if short lived, destructive power.

“If a laser puts out a pulse with modest energy, but the time is incredibly tiny, the power can be huge,” said the LIPC’s lead scientist, George Fischer. “During the duration of the laser pulse, it can be putting out more power than a large city needs, but the pulse only lasts for two-trillionths of a second.” To put the output in perspective, Fischer said a big filament light bulb uses 100 watts while the output of the LIPC’s optical amplifier is 50 billion watts.

While the initial test was successful, there are still challenges ahead — including synchronizing the laser pulse with the high voltage output, making the system rugged enough for field use and powering it for extended periods. However, Fischer said there is excitement for the potential of the prototype.

“The excellent results certainly added to the excitement and camaraderie,” Fischer said. “We never got tired of the lightning bolts zapping our simulated (targets).”
www.pica.army.mil