The battery-powered, wirelessly connected device runs off of a Raspberry Pi for all of its data processing, storage, and exchange capabilities. 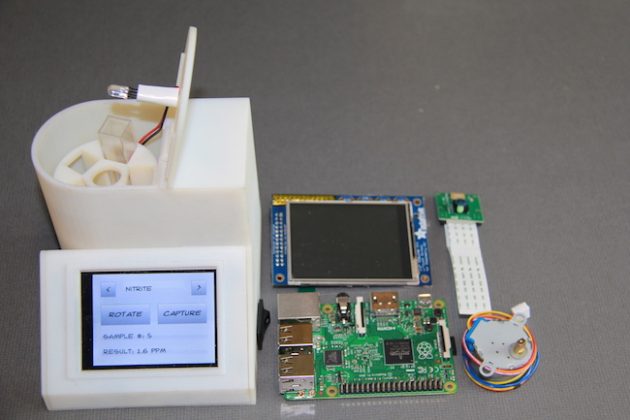 A team of engineers at the University of British Columbia is working on an additively manufactured portable water diagnostic-device with the ability to rapidly detect harmful nitrite levels in drinking water.

The battery-powered, wirelessly connected device runs off of a Raspberry Pi for all of its data processing, storage, and exchange capabilities. A light-emitting diode (LED) provides backlighting, and an 8-megapixel resolution digital camera is used to image and record the color change in five different cuvettes (a tube-like container) containing the specific solutions required to perform the colorimetric assay.

“Nitrite is widely used as a preservative and additive in food production, bleaches, and dyes in the industry, and fertilizer in agriculture. However, it is classified as a health hazard because high nitrate concentration in water can cause many diseases such as methemoglobinemia, miscarriages and central nervous system defects at birth,’’ says George Luka, a research engineer working on the project.

Detecting colorimetric assays falls under the wider chemical analysis called Colorimetry. It’s a technique used to determine the concentrated existence of specific substance within a compound. In this case, the device in question will detect the existence of nitrate in a given water supply, through the rapid changing of colour, identified by the camera and LED display. While nitrite as a compound was used as a proof of concept, the device touts the ability to test for a variety of substances.

Think back to high school science class when you were learning about what happens when an acid or a base were added to a universal indicator. Using the pH scale you would try to determine where chemicals like citric acid or sodium carbonate fell on the pH scale by looking at its colour reaction. This is obviously a simplification of what the UBC device does, but the example works for our purposes.

Much like the pH scale example, the UBC device relies on specific solutions created by the engineering team—usually distilled water mixed with another chemical—to highlight or “colourize” the compound in question.

According to Luka, using a stand-alone device instead of a smartphone “reduces the likelihood of human error, which can compromise repeatability, sensitivity, and reliability of colorimetric assays for personal use and POC testing.” Eventually, though, Luka does see data output interfacing with smartphones in the future, to further increase analysis without comprising accuracy or precision.

Additionally, the device and the algorithm in development are not limited to water analysis and can be used for urine analysis and other colorimetric assays for environmental and medical applications and other hazardous species.

You can find the research paper that the team published, here.