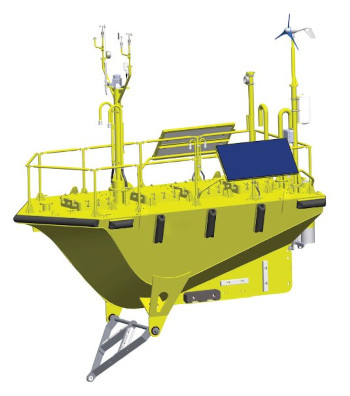 Designed by UVic’s PRIMED lab, this wind data gathering buoy is due to launch off the B.C. coast in November.
(Photo credit: AXYS Technologies)

Researchers at the University of Victory announced they will launch a 9-foot tall wind data gathering bouy later this month off the B.C. coastline near Trial Island. Over a six-month period, the 5,500 kg instrument will use a wind turbine and a 3D laser-scanning system, as well as meteorological and oceanographic sensors, to gather live data about wind speed and behavior. The hope is that the project will fill a knowledge gap that has prevented offshore floating turbines from being used more widely.

Constructed by Sidney, B.C.-based AXYS Technologies, the bouy is the brainchild of the university’s Pacific Regional Institute for Marine Energy Discovery (PRIMED) lab, headed by UVic mechanical engineering professors, Brad Buckham and Curran Crawford. According to the researchers, the hope is that greater utilization of offshore wind power will help remote B.C. coastal communities replace or reduce their reliance on diesel fuel.

According to Buckham, despite wind energy gaining ground as a power source, offshore turbines haven’t experienced the rate of adoption as land-based turbines. This is mostly due, he says, a lack of data needed by industry to develop accurate, certifiable and insurable technologies.

“This buoy will be in place for a sustained period as part of a data collection campaign for the purpose of trying to support a floating offshore wind industry,” says Buckham.

This research was supported as a part of UVic’s Canadian-Pacific Robotic Ocean Observing Facility (C-PROOF), a project funded by the Canadian Foundation for Innovation and BC Knowledge Development Fund to build ocean observing capacity off the BC coast.
https://onlineacademiccommunity.uvic.ca/primed/