Tightening emissions and fuel economy legislation is forcing manufacturers to produce more hybrid vehicles in which an electric motor and battery-pack supplements the internal combustion engine. This contributes to improved economy, but at significant weight and cost penalties.

This is leading engineers to pursue lighter, less costly alternatives, one of which is using the kinetic energy stored in a spinning flywheel. It is in effect a battery that stores energy mechanically, not chemically.

A flywheel has several advantages over batteries. It is less costly to produce (some one quarter of a battery-electric system), has about one third less mass, no end-of-life disposal problems, and the ability to release and absorb energy instantly without damage.

It is also more compact for easier integration into the vehicle.

Using flywheels to store kinetic energy is not new. In the 1940s Swiss company Orlikon’s “Gyrobus” replaced the combustion engine with a flywheel energized by an on-board motor-generator fed by overhead wires and roof-mounted booms. The bus could travel six km on a full charge and was used until the mid-1950s.

Flywheel development continues both in stationary and mobile applications. Mississauga, ON-based Temporal Power Ltd. is currently experimenting with them for storing municipal electrical energy to smooth out power grid imbalances created by fluctuating demand, and by inputs of renewable energy from sun and wind sources. 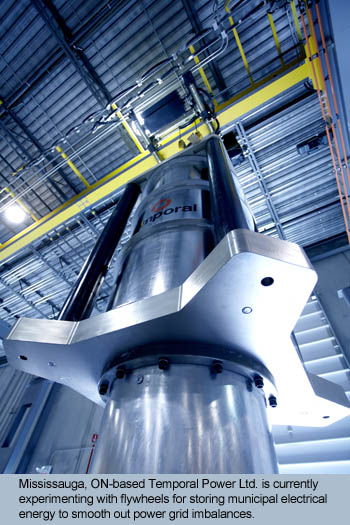 Temporal has installed ten 4000 kg cylindrical flywheels in in-ground concrete silos near Harriston, ON. Excess power is used to activate a motor-generator that spins the flywheels up to 11,000-plus rpm. When power is demanded, the motor-generator switches immediately to generator mode using the flywheel’s kinetic energy to produce electricity.

In automobile use, UK-based powertrain technology specialist Torotrak’s Flybrid energy recovery system is taking advantage of a mechanically driven flywheel to store kinetic energy. Torotrak obtained this technology when it purchased Flybrid Automotive of Northamptonshire in 2014.

Torotrak uses a small carbon fibre flywheel that is lighter than steel and can withstand much higher rotational speed  – up to 60,000 rpm. Since energy increases as the square of speed, a lighter wheel spinning twice as fast produces four times the power, enabling it to store more energy. Flybrid’s flywheel housing is under vacuum to reduce friction on the wheel.

In the event of flywheel failure a carbon wheel is safe because if it disintegrates it does not release steel shrapnel, but sheds shredded fibre that is light enough to be contained within the casing.

Torotrak’s automobile testing has dispelled the prevailing opinion that hybrid power is mainly effective in low speed urban driving and acceleration assistance. Highway cruising is limited so the engine takes over.

Torotrak has found that an energized flywheel can do all these things, and also maintain highway speed without the engine. When the flywheel slows down the engine re-starts to maintain vehicle speed and re-energize the flywheel. Once up to speed the wheel begins releasing its energy and the cycle repeats.

One of the several vehicle manufacturers Torotrak is working with is Volvo, where a study showed the Flybrid system “spin-up and cruise” capability achieved a 25% highway fuel economy improvement over a non-hybrid Volvo.

If the engine is turbocharged, the flywheel can compensate for the turbo lag caused by less exhaust energy from the lower engine rpm.

A significant component of the Flybrid flywheel system is its clutched flywheel transmission that links the flywheel mechanically to the driveline but allows flywheel speed to be independent of engine speed. This enables power flow from powertrain to flywheel and vice versa, and the recovery of energy from vehicle braking to reenergize the flywheel.

Torotrak envisions the Flybrid flywheel eventually becoming fully integrated into the gearbox for more compact packaging, and to share systems like lubrication and cooling.
The Flybrid system has proved its durability in Formula One racing’s Kinetic Energy Recovery System (KERS). Torotrak sees a bright future for it in passenger cars.

Bill Vance (bvance1@cogeco.ca) is a founding member of the Canadian Automotive Journalists Association and author.