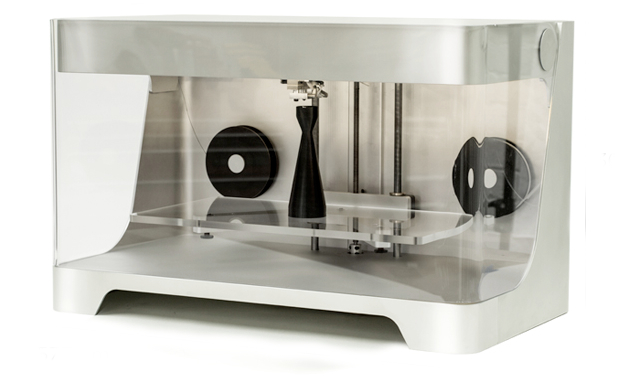 At SolidWorks World 2014 this week, Boston start up, MarkForged, debuted its Mark One composite 3D printer, the first additive manufacturing machine to print in carbon fiber. In addition, the desktop 3D printer is also designed to print fibreglass, nylon and PLA thermoplastic, allowing for multi-material parts.

According to the printer’s inventor, Greg Mark, 3D printed carbon fiber is 20 times stiffer and five times stronger than the ABS build material typical of FDM machines. In addition, models produced from a Mark One display a strength-to-weight ratio greater than that of machined 6061-T6 aluminum, the company says.

Reminiscent of a highly stylized reel-to-reel tape recorder, the MarkOne features aluminum unibody construction to enhance rigidity and kinematic coupling of the bed to eliminate the need for levelling after each build.

The Mark One 3D is expected to retail $5,000 with pre-orders to begin in the near future through the company’s web site. Shipments are expected to being later in 2014.
http://markforged.com