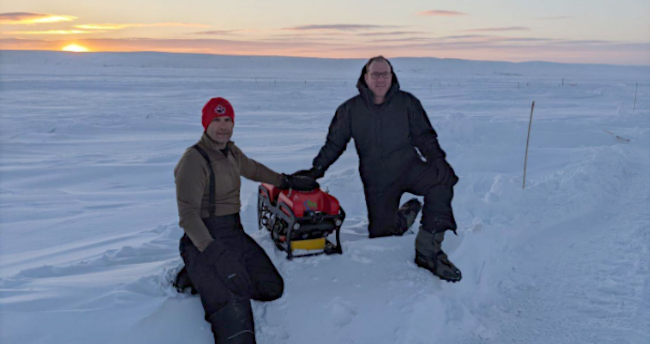 SEAMOR Marine – a Nanaimo, BC-based maker of remotely operated vehicles (ROV) – announced that its Chinook underwater ROV has helped the RCMP’s diver team recover an accident victim north of the Arctic Circle. At a depth of 160m, the mission broke the RCMP’s record for the deepest recovery mission in its history.

In January, a Back River gold mining project worker died when his bulldozer fell through the ice while widening the 170km ice road connecting the project site with the Bathurst Inlet port facility. The bulldozer sank 160m under the ice, a depth inaccessible to RCMP’s dive team from the National Underwater Recovery Training Centre (NURTC), Canada’s Nanaimo-based elite police diver training headquarters.

After a different ROV retrieval attempt failed, the team employed their SEAMOR ROV. Custom built for NURTC, the Chinook ROV is a 6-thruster vehicle, capable of diving to 600m and flying with a tether as long as 2km. For this mission, the NURTC team also integrated the Alpha Arm, a third-party robotic arm designed for subsea ROV’s.

After clearing the underwater area and recovering the first ROV, the team used the Chinook’s underwater GPS, multibeam sonar, HD video and two manipulator arms to find and open the door of the sunken bulldozer and retrieve the victim’s body. The NURTC team have nick-named their Chinook ROV ‘Fab’ after Fabrice Gevaudan, an RCMP diving colleague who died in the line of duty.
https://seamor.com