Basketball star Fred VanVleet popularized the slogan “Bet on yourself” – that is, passing up a modest sure thing to risk an all-in pursuit of a far bigger prize, in his case, a huge contract.

Jeff Cybulski made a similar bet, opting to leave behind a life in management, reporting to higher ups with ultimate decision-making power, to become his own boss, for better or worse. Two years ago, he launched Rebel Automated Systems (RAS) in the back of a friend’s shop.

“I took the initiative to get it fired up when the industry was on a down trend,” says Cybulski. The name of the company, he adds, suited his mindset – to be an upstart in the marketplace. (It also happened to be the since-retired moniker of his wife’s former high school – Eastwood Collegiate in Kitchener).

For a time, Rebel was just Cybulski and his phone, drumming up orders, designing and building small systems. During the first COVID-19 wave in 2020, he had some operational help for a while from his brother, who was on temporary furlough from an auto-parts manufacturer during the initial pandemic slowdown.

Two years and two expansions later, Rebel now operates out of a 10,000-sq-ft space in Cambridge, ON, with just shy of 20 employees and worldwide strategic partnerships set in place. The company currently delivers custom automated solutions to customers not only in southern Ontario but worldwide.

Rebel’s latest creation, a robotic solder cell for Electrical Contacts Ltd of nearby Hanover, automates a step in the process of making contacts. Electrical Contacts, which celebrated its 50th anniversary last year, has built a global customer base as a premier supplier of many styles of contacts, contact assemblies and tapes for electrical circuit protection and switching devices, like circuit breaker panels.

The solder cell doesn’t actually do any soldering, but rather sets up the contacts for the furnace. It’s typical of the custom machines needed to automate manual gaps in multi-stage manufacturing flows. Many of these gaps represent a function that’s supportive of or subordinate to a major process, and for which there is no off-the-shelf automation solution.

The sheer number of custom machines being built by OEMs in southern Ontario for local customers suggests there are many such opportunities out there. One of Cybulski’s final projects in his prior executive-for-somebody-else life was a cell automating PVC pipe-sawing – cutting long lengths into short ones – for bending into elbows and other shapes.

The solder cell performs two functions. First, the unfinished silver contacts are scanned and flawed ones ditched. Then, a trio of desktop-size robots load them into pockets on honeycomb-like boards that are pre-filled with a small amount of solder. The pockets reflect the size and shape of the contact; some are square, some round, some oblong, etc. The board, once populated, is sent to a high temperature furnace where the solder fuses and smooths out the contact’s brazing surface.

The empty boards are lifted from a magazine and positioned for the robots. After the boards are fully populated with contacts, they are shifted to the outfeed, then loaded into another magazine for transport to the furnace area. The use of Festo’s CMMT-ST servo drives are particularly noteworthy; their small size and optimized design for low power (max 300W) positioning and motion tasks make them well suited to the stepper motors throughout RAS’ solder cell.

The contact pathway begins with a vibratory feeder that moves them into the scanner viewing area, ensuring each is in the right orientation. After one is picked, it’s passed over a three dimensional scanner. Flawed contacts are dropped by the robot into a reject bin. 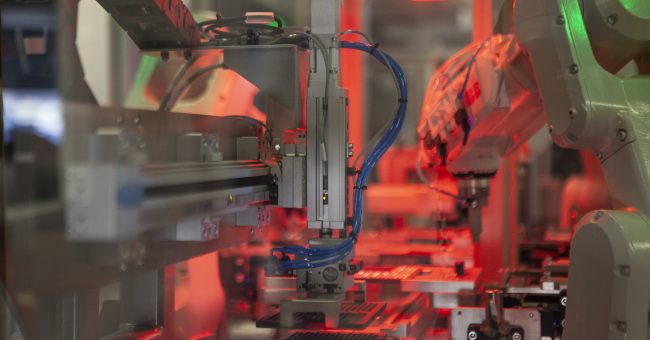 RAS’s machine employs Festo pneumatic actuators and grippers to de-stack and position the empty boards for insertion of contacts by three ABB robots, which then perform an optical inspection.
(Photo credit: Festo Canada)

A complete cycle – inspection and placement – takes three seconds. Employing three robots, the system is able to place a contact in a board every second. The only manual intervention is replenishing the supply of contacts and empty boards and transferring magazines of completed boards to the furnace area.

According to Cybulski, Festo’s versatility was particularly important under pandemic conditions, since late deliveries of parts have been a big issue for machine builders.

“We need parts when we need them,” he says. “If something is supposed to be delivered in three weeks and shows up in eight weeks, how can we deal with that when we’ve given the customer a delivery schedule? With Festo, we are getting stuff from Germany, and it was here in three weeks, as promised. That and the engineering support we get from Ray [Reginato, Rebel’s Festo sales rep]. So, we’ll continue to use Festo as our standard … until I’m not here anymore.”

The solder cell has been programmed for 10 of Electrical Contacts’ largest-volume part types. The setup can be changed from one type to another in 15-20 minutes, with the only physical changeover being the grippers; the rest self-aligns because it’s servo-driven.

One typical board size has 480 pockets, and another has 240, to accommodate larger contacts. Batch runs range from 10,000 to 50,000 contacts. The contacts are as small as 125 thou (1/8 inch) diameter. When filling pockets is done manually “the operator has to put these in, they can only go in one orientation, they can’t be facing upwards; they have to face downwards,” Cybulski says. “It’s cumbersome; it’s time-consuming.” Automation assures consistently high output and accuracy, and there are no manpower availability concerns.

The machine’s other notable strength is its ability to maintain continuous production. With three robots, even if there is a fault with one, the other two keep inspecting and loading, says Ryan Baetz – Project Manager. “It’s kind of a set-it-and-forget-it machine; it’s designed to run with hardly any operator intervention.”

The machine is in place at Electrical Contacts and has earned plaudits from the customer, says Cybulski. “They tell us it’s running great, and is really easy to operate and add more part types as intended.”

As for his assessment of the gamble he took starting Rebel Automated Systems, he’s philosophical.

“As I see it, every decision in life has its pluses and minuses, and starting Rebel has them both,” he says. “The hours I put in are double that of a regular job. However, the satisfaction of completing the unknown that we have signed up for is twice as rewarding.”
rebelautomatedsystems.ca

This story was provided by Festo Canada.