ATS Automation’s modular Symphoni technology combines the speed of continuous motion with the precision and flexibility of robotic assembly. 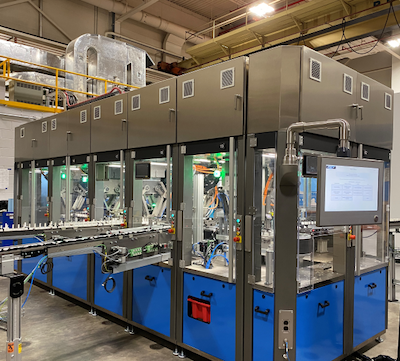 When Pfizer and BioNTech announced that their experimental COVID-19 vaccine had tested 90 percent effective in November, hopes immediately lifted that the end of the pandemic was in sight.

Provided their vaccine and others pass the remaining regulatory hurdles, the road ahead will depend on a manufacturing and logistical effort on a global scale.

Given that COVID vaccines will likely require two shots, estimates put the number of doses needed at 700 million injections for the U.S. alone.

To meet that challenge, the U.S. government launched Operation Warp Speed, an initiative to produce millions of vaccine doses, plus the necessary medical supplies to do the job.

As part of that effort, a U.S. medical device manufacturer awarded ATS Automation a $20 million contract in September to design and build several automated manufacturing systems capable of mass-producing safety syringes as quickly as possible.

According to Peng Cau, VP Sales, Emerging Markets and Symphoni at ATS Automation, this digital assembly technology enables the design of machines that combine the high-speed of continuous motion with the precision and flexibility of indexing or robotics-based assembly.

“To explain Symphoni, a helpful metaphor is to imagine you are on a train and I’m on a platform and I want to hand you a bottle of wine,” says Cau. “If we do that by indexing, the train stops and I hand you the bottle. It’s very gentle and precise but there’s a lot of lost time in starting and stopping. With continuous motion, the train doesn’t stop so I hand off the bottle at full speed but there’s the danger of smashing it.”

“With Symphoni, the train doesn’t slow down or stop; instead, I speed up, like Superwoman, to match the train’s velocity and gently hand over the bottle. That synchronized motion is made possible by the Symphoni OS software and the system’s overall architecture.”

In addition to speed and precision, another core differentiator is the technology’s flexibility. In place of custom machines designed to make one or a limited set of products, a Symphoni-based system is composed of multiple modular building blocks, sub-systems that each perform a set operation.

By adding, removing, rearranging and/or re-tooling the modules, systems can be quickly configured and reconfigured. As a result, Symphoni systems are multi-purpose, Cau says, flexibly adapting to assemble new products, as markets change or the need arises.

While a new technology to ATS, Symphoni is currently in its fifth generation. It was invented and patented in 2012 by Transformix, a mid-sized Kingston, Ontario-based automation company established in 1995 by Ms. Cau and three of her fellow Queen’s University engineering alumni.

Before ATS acquired Transformix and its IP in 2018, the technology had been used in the design 36 machines and went by the name CNCAssembly – a brand intended to suggest a fully programmable machine that makes a wide variety of parts by simply changing its tooling and software code.

According to Chris Hart, ATS President of Life Sciences, it was those qualities that drove the decision to acquire Transformix.

“Traditionally, continuous motion is very hard tooled to a particular product that will run for a number of years and not very change over friendly. So, when we discovered what Peng, Ken and the team were doing at Transformix – a very flexible, a modular system that’s easy to adapt to new variants – we could quickly see the match as a spring board beyond what our competitors were offering.”

Under ATS, Symphoni has evolved beyond that initial CNC machining analogy. In its latest incarnation, the company says the technology has become a fully integrated digital automation system that orchestrates the operation of multiple modular stations to create, as its name implies, a “symphony of motion.”

At the heart of the concept are what are referred to as “engines” – sub-systems composed of high-speed, tightly synchronized components. For example, a pick-and-place engine commonly includes a delta robot, a machine vision system and other automation components.

“When I say a Symphoni system is electronically cammed, I mean everything,” says Nicholson, one of Transformix Automation founders and a co-inventor of the RSM and Symphoni technologies. “When we’re triggering a camera, for example, that’s electronically cammed. So, if we know that it takes 17ms between triggering a camera and it taking the picture, we build that into the operating system so it compensates; it always takes the picture at the same position whether the system is running at 25 parts per minute or 360 per minute.

“We carry that throughout the entire system,” he adds. “Every device – gripper fingers, pneumatic actuators, cameras and the servos – are all electronically cam driven and mapped out throughout the cycle. As a result, we can eliminate all those bits of wasted time because we know where everything is going to be. Everything is done in anticipation.”

It’s that ability to anticipate the position of each component, he says, that allows the system to match speeds between engine components and make precise hand-offs at full speed.

“At a module level, there is a 360-degree profile for every single device, including servo motors and other things like cameras,” he says. “In each cycle, the master processor makes sure all of them, individually, are where they are supposed to be, so they come together like a symphony of motion. The devices are like individual musicians, following their own sheet music, but there is one conductor checking that each component is where it’s supposed to be, every 800 microseconds.”

According to ATS, electronic camming, plus a custom designed delta bot, allows Symphoni’s pick-and-place engine, for example, to operate at up to 150 strokes per minute while carrying a common 2-up payload, thus yielding a potential output of 300 parts per minute.

However, Nicholson says it isn’t so much about component speed as it is wringing out all the small inefficiencies during an operation which stack up to a significant time saving.

“I think the important thing about our RSM technology is that its profiles are targeted, meaning a Symphoni system goes like hell where it can and slows down where it has to” he adds. “The system isn’t going crazy fast but it is being crazy efficient, so we’re ultimately getting a lot more done in a set amount of time.”

What’s more, electronic camming isn’t limited to the “engine” level of the system. Typically, one or more engines are combined to make up a module – in essence, a stand-alone machine with its own I/O, servo drives, Symphoni OS control software and a PLC controller for each engine, housed within a standard one or two-meter-wide cabinet. 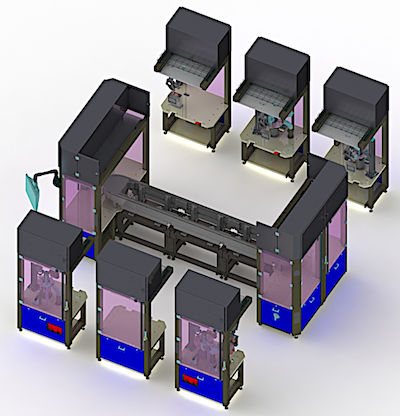 Symphoni-based systems are made up of stand-alone modules, each with their own PLC controller and standardized software, plus ATS’ SuperTrak linear conveyor, all managed by a master controller and HMI (left).

An entire Symphoni-based system is therefore composed of multiple modules, with their own specific assembly function, stacked closely together around a transport engine (aka ATS SuperTrak linear conveyor) to move the pallets from one station to the next.

While each module is a complete machine itself, all the module PLCs report to and receive instructions from a system master controller, which shares the same standardized Symphoni OS to coordinate each module over a deterministic PowerLink network.

As a result, Nicholson says, Symphoni systems aren’t just hyper-efficient but also designed to be reconfigured and re-deployed quickly.

“For example, we recently had a customer, with a Symphoni machine making an unrelated product, who wanted us to reconfigure the system to make COVID test kits,” Nicholson says. “So, we pulled some modules out, plugged them in at a different location, changed the tooling and got it into service very quickly. In total, it took 14 weeks to design, order, install and test the new contact tooling.”

In addition, he says that adding, removing or redeploying modules of an existing system doesn’t require a control engineer. In fact, most operator, MRO and engineering tasks can be carried out within the system’s Symphoni OS via the HMI. For more in-depth programming, ATS provides the off-line Symphoni Config application.

“Through Symphoni Config, you can change servo profiles, pick positions and place positions and stuff like that, and then save it as a recipe,” Nicholson says. “The system then rebuilds the cams in the background and now you’re running something different.”

Ultimately, Peng says Symphoni – due to its high speeds, scalability and configurability – is well suited for Canada’s manufacturing sector, which has historically been risk adverse, cash strapped and therefore lagging behind globally in terms of automation.

“When you look at the total cost of goods sold, there’s nothing like Symphoni to reduce total cost of ownership,” she says. “In the early stages of product development, when production volume is low, manufacturers can invest in one or a few of our modules to do prototyping.”

“As volume picks up, you can add automated feeders and more modules,” she adds. “Before you know it, you have a complete line that runs 24/7 at high-speed, and can produce one or more products and adapts to new products in the future. Think of the savings in all that.”
www.atsautomation.com