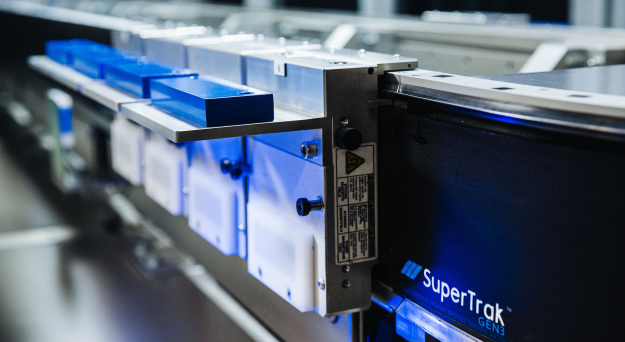 As the original “smart” conveyor, the ATS SuperTrak Gen3 has matured considerably since its introduction 20 years ago. (Photo credit: ATS Automation)

In the early days, ATS and MagneMotion (now part of Rockwell Automation) where the only game in town but have been joined by Beckhoff, Festo and Bosch Rexroth, as well as a few smaller players. In addition, the product segment has continued to mature in that suppliers have differentiated their systems to stand out from the crowd.

Whoever makes the system, they all operate based more or less on the same principle. At the core is a track composed of straight and/or curved linear motor segments. Joining them together allows for the conveyor’s path to be configured in various geometries to suit different applications. Unlike most traditional conveyors, smart track systems don’t need to be horizontal but can be oriented vertically or tipped on end.

Along the edge of the track run the shuttles (aka movers, pallets or carriers depending on manufacturer). These movers are affixed to the track primarily by wheels but aided by the attraction between the linear motors’ electromagnetic coils and permanent magnets in the shuttle. By manipulating the activation of the coils, each shuttle can be programmed to move around the track, individually or in groups, at different speeds, accelerations and/or directions, as needed.

A related but less obvious strength of these systems is their micron level precision, enabled by a linear encoder scale on the track. Consequently, the conveyance system can participate in the manufacturing process itself. For example, the x-axis motion of the shuttle can be coordinated with motion at a process station to simplify tooling operations. These systems also possess built-in collision avoidance, auto-queuing and auto indexing capabilities.

Beyond speed and independent motion, linear motor conveyance systems are also highly flexible; tracks can be scaled by adding or removing track and shuttles or reconfigured to new geometries. In addition, reprogramming happens quickly by swapping motion profiles in software, thereby enabling multiple product lines and shortened change over. These systems also consume less electricity and require less maintenance than conventional conveyors since the wheels are the only moving parts.

One of the often overlooked advantages linear motor transfer systems afford, says Ben Hope, product manager for SuperTrak CONVEYANCE at ATS Automation, is the ability to condense an operation’s footprint.

“Footprint size effects revenue per square foot, especially in areas where real estate is expensive,” he says. “Compared to transitional synchronous conveyance, independent asynchronous shuttle control provides the means to change shuttle pitch allowing the system to use only the space required.”

ATS SuperTrak
Now in its third generation, the performance of ATS’ SuperTrak has improved substantially since it’s first iteration. For example, shuttles on the current SuperTrak Gen3 can handle payloads up to 10kg (up from 1kg in the first generation) while the maximum speed each shuttle now reaches is 4m/s unloaded, (up from 1m/s).

Similarly, each shuttle’s maximum acceleration is now 39.2m/s2 (4g) with a 1-kilogram payload. With a 10kg load, acceleration tops out at 1g. In addition, the SuperTrak Gen3 features fully controllable corner segments, rather than the rotating drums on the company’s previous iterations.

From a control engineering perspective, each shuttle functions as a separate servo axis. To program them, ATS provides its TrakMaster software in which engineers can digitally model a track design and simulate the overall conveyance sequence by fine tuning shuttle motion, acceleration, stop locations and shuttle coordination. Once the bugs are worked out virtually, the motion profiles can be output to integrate with Ethernet/IP, ProfiNet or other protocol-based systems.

Beyond improvements to SuperTrak, ATS released a related linear motor conveyor line last year, called SuperTrack Micro, that expands the concept to encompass sorting and diverting operations. By positioning two oval tracks in close proximity, the Micro’s “double-sided shuttles” can switch between tracks at full speed. This allows for one or more shuttles to be diverted for additional operations or part inspection, and then merged back onto the originating track, when and if needed.

For that added functionality, the trade-off is a reduction in per shuttle payload capacity (1.5kg for a 50mm-wide shuttle and 3kg for a 100mm shuttle). In addition, top speed is limited to 3m/s and acceleration is reduced to 1.5g with a 1.5kg payload (or 5g with a 0.25kg payload).

Beckhoff XTS
While the same in concept, Beckhoff Automation’s eXtended Transport System (XTS) differs from other systems in terms of its mechanics and design flexibility. For example, the system’s six or 12 wheeled shuttles (or movers) are fully captive, “gripping” the horizontally oriented linear motor track like a C-clamp and the movers’ magnets engage the motor coil both above and below the track to balance the magnetic force.

Practically speaking, XTS track length tops out at 100M with approximately 200 movers, depending on computation limits. Unloaded, XTS movers can accelerate up to 100m/s2 (10g) reaching a top speed of 4m/s. With its maximum ~8kg payload, standard mover acceleration drops to 2m/s2 (.2g).

Mover positioning accuracy is less than ±0.15mm at 1.5m/s with repeatability of less than ±.01mm. As with other linear motor systems, movers can also apply force between them to act as make-shift grippers. At standstill, XTS movers can apply up to 100N or a continuous force of 30N while in motion.

Beyond its specs, what makes the XTS stand out is that Beckhoff has fully explored the potential of the linear motor conveyance concept. Most notably, XTS allows for multiple track geometries. In addition to straight 250mm segments and 180 degree corners, the company also offers 90 and inside/outside 22.5 degree turns. Combining them opens the possibility of not only straight and oval tracks, but also circle, square, rectangular, S-shaped tracks and any permutation thereof.

“From a mechanical standpoint, the compact size of our system is often key,” says Calvin Wallace, managing director, Beckhoff Canada. “It’s not only the small track, but also the simplicity of the control system; all that’s required is an IPC, TwinCAT automation software and EtherCAT.”

Like ATS’ SuperTrak Micro, Beckhoff has also expanded XTS into multiple track configurations by taking the concept into the third dimension; two or more tracks can be stacked on top of each other to enable sorting, diverting and merging shuttles but without taking up additional floor space. In effect, this is facilitated by “elevators,” specialized sections of straight track that can raise or lower shuttles from one track level to another.

XTS also comes in specialized versions. The XTS Black line, for example, offers motor modules that support integration of third-party track systems for higher-payload applications. The company’s XTS Hygienic line carries an IP 69K rating due to its stainless steel surfaces, with no hidden edges or undercuts, and sealed joints. Designed for the pharma and food industries, the line is suitable for applications that require high-pressure washdown. 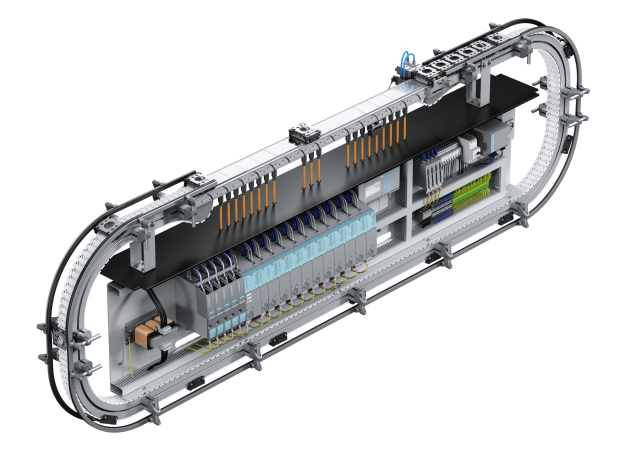 As a result, MCS is one of the most customizable of linear motor systems. Since it can mesh with most traditional conveyors, Festo engineers transitions between MCS motor segments and belt, chain, etc driven conveyors. Carriers, as well, come in multiple sizes and types to suit the application and facilitate the hand-off between sections.

“Because we can customize these systems, there isn’t really a payload limit,” says David Dolezal, electric automation business development manager with Festo Canada. “We’ve designed MCS systems to handle everything from a few grams to 150kg because we can gang motor segments together in parallel to move a heavy load. We can build the system to whatever the application requires.”

For single-width motor implementations, in line with other systems, MCS payload tops out at 4kg. Unloaded, maximum carrier speed is 4m/s with a maximum acceleration 50m/s² (5g) and repetition accuracy of ±.05mm when in the direction of travel.

In its standard form, the MCS offers 102mm and 306mm sections of linear motor track for potentially unlimited track length. However, each track segment requires one or more motor cables connected to a Siemens controller, depending on application complexity, plus an encoder cable for closed-loop implementations.

To design a Multi-Carrier-System, Siemens’ MCS Creator software enables graphical drag-and-drop layout and configuration of the motor segments. User can also create a bill of materials and select a suitable controller type. Detailed programming is performed with the RailControl software library in which carriers are treated as virtual axes and motion functions, such as positioning, gear synchronization, curve synchronization or path interpolation, can be used.

Released in May 2020, the Rockwell iTRAK Small Frame provides tighter precision and mover pitch than the iTrak Medium Frame at the cost of payload capacity. (Photo credit: Rockwell Automation)

The workhorse of the pair, the iTRAK Medium Frame, allows for tracks up to 100 meters long (256 sections) with up to 250 movers, each of which can handle payloads up to 40kg. Unloaded, mover top speed is 5m/s with accelerations greater than ~100m/s2 (10g).

Peak force attainable is contingent on motor coil and mover width, ranging from 88N for 50mm motor and mover width up to 793N when 150mm motor segments are paired with 150mm-wide movers. In addition, mover repeatability hovers at ±0.03mm and minimum pitch ranges between 66 to 75mm.

As of May 2020, Rockwell also offers the iTRAK Small Frame, designed for food and beverage and packaging applications, that shares its partner’s flexibility but not its brawn. While mover top speed is also 5m/s, payload per mover tops out at 4kg and peak force is 100N.

In addition, track size is limited to approximately 64 motor sections and 128 movers total. On the upside, the Small Frame features a stainless steel track and carries an IP66 rating. In addition, mover pitch is reduced to 50mm and repeatability is +/- 0.01 mm.

While the iTRAK is in line with other smart conveyors discussed here, the company offers the widest range of linear motor products in terms of application. The MagneMotion Lite, for example offers fast programmable motion and intricate branching pathways for small payloads (2.5 kg per mover) while Rockwell’s QuickStick 100 and HT lines handle payloads as large as 100kg or into the thousands of kilograms, respectively.

This smart conveyor overview only scratches the surface of these systems’ potential and limitations. And while there are numerous advantages, it should be noted that they carry a higher initial price tag than traditional systems. However, proponents of the technology point out that since they are quicker to design and build, require less maintenance and power consumption and increased up-time, comparing total cost of ownership is a nuanced calculation.
https://atsautomation.com
http://beckhoff.com
festo.com
rockwellautomation.com