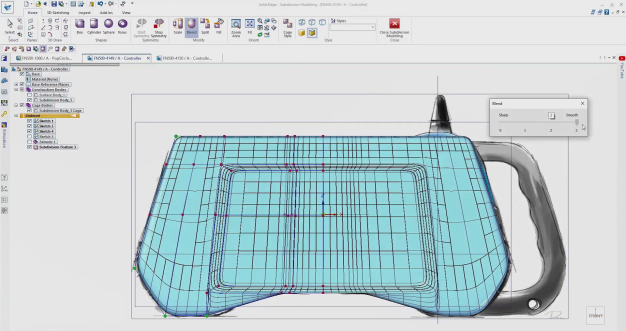 Siemens holds a unique position among MCAD software firms: It’s the only one that also operates as a manufacturer. Other big MCAD vendors, like Autodesk and PTC, have presentation centers in which they demonstrate manufacturing on a tiny scale, but Siemens is a manufacturing behemoth that last year made CAD$115 billion – 20x more than its largest CAD software competitor, Dassault Systemes.

Siemens’ CAD division (now called Siemens Digital Industries Software) is also the largest CAD vendor to resist today’s notion that design software must run on the cloud, a position that is in direct contrast to competitors, who find customers still clinging to desktops irritating. For Siemens Digital Industries Software CEO Tony Hemmelgarn, design belongs on the desktop, end of story.

“We will never have to have that hard discussion with customers about them having to make a difficult transition of technologies [from desktop to cloud],” he said.

What does belong in the cloud is collaboration, he says, and so Siemens is working at making its popular Teamcenter collaborative software run on the cloud, under the name Teamcenter X. You can see how this makes sense: Engineers have powerful desktop systems running NX or Solid Edge, but collaborate with each other and fieldworkers through the cloud.

And even when it does come to the cloud, Siemens offers unusual flexibility. You can choose to have the software hosted by Siemens (on Amazon), by private or local cloud providers, on premises, at the edge or hybrids thereof. No one else offers this.

You Pay Your Way
Siemens also insists that customers have a choice in how they pay for software, whether through permanent licenses or by subscription. Hemmelgarn says he is surprised by how many of his competitors have forced customers onto subscriptions.

Despite his declaration, the company is nevertheless pushing forward with software that can only be paid for by subscription. It turns out that CAD vendors who go to the cloud have no choice in the matter; software that runs non-stop on the cloud has to be paid for non-stop to cloud providers like Amazon, and so customers also have to pay non-stop.

If we understand nothing else about Siemens’ future, it’s that it will be based on Mendix. This platform with the odd name has an equally odd history: It began as a cloud-based visual programming service for business applications, like human resources and scheduling. Two years ago, Siemens bought it for CAD$950 million and then applied it to CAD.

We can think of Mendix as a combination of Autodesk’s Forge API and PTC’s Onshape/Atlas platform. The no/low code app development platform has a three-fold role at Siemens: As a set of software for running businesses; an API for customers to customize; and as the underlaying technology that powers all cloud-based apps for Siemens.

“We are launching a lot of applications based on Mendix,” said senior VP of business strategy and marketing, Brenda Discher, formerly of Autodesk marketing. 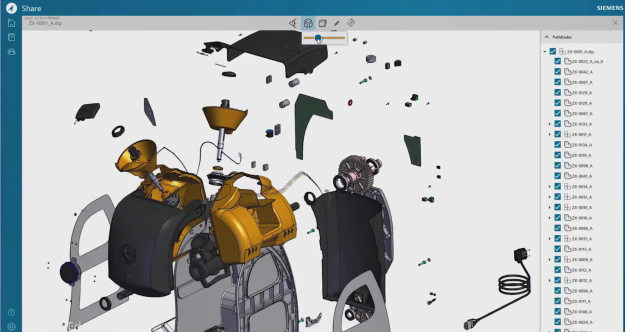 Solid Edge Ecosystem
In July 2020, Siemens held a dedicated launch event for Solid Edge 2021, at which it emphasized the do-it-all nature of its mid-range software. Presenter Dan Staples, VP of R&D, boasted that Solid Edge has “the best mechanical design in the marketplace.”

In addition to MCAD, the company also pushed that Solid Edge 2021 now encompasses a number of related design functions, including electrical design, simulation, data management and collaboration. In reality, the implementation of those functions in Solid Edge isn’t quite as complete as the marketing might suggest. While Siemens, as a whole, does possess a wide breadth of software offerings, Solid Edge 2021 depends on external applications to perform those functions.

Electrical design in Solid Edge, for example, consists primarily of designing cabinets and auto-routing wire harnesses; it doesn’t actually do electrical design but instead depends on importing electrical and PCB designs through TeamCenter.

Similarly, data management in Solid Edge requires parts of TeamCenter to control drawings and other files, while cloud-based collaboration depends on the beta release of TeamCenter X. With it, users can share and view models on mobile devices and use AR (augmented reality) to place them within a physical environment.

In addition to TeamCenter’s functionality, Solid Edge 2021 enables simulation through a cut-down version of Siemens’s own Simcenter FloEFD while generating Technical Publications means output as PDF or through QuadriSpace’s HTML 5-enabled Share3D for interactive documents. 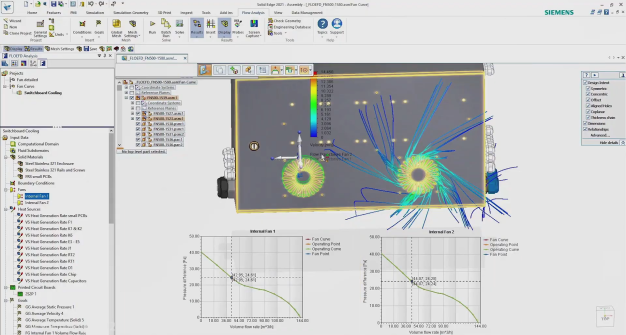 What’s New in Solid Edge 2021
Within stand-alone Solid Edge 2021, Siemens touted Subdivision modeling as the number-one feature. This modeling method is meant for industrial designers who make organic-looking things like the swoopy shell of a mouse or camera body. The emphasis in sub-D is looks not accuracy.

In this form of modeling, you begin with a primitive, like a box or sphere, and then interactively push and pull mesh areas to get closer and closer to the shape you want. When you need greater detail, you sub-divide sections of the mesh into denser, higher resolution areas. Sharp corners are added by manipulating edges. Solid Edge also includes a handy mirror function, so that anything you do on one half of a model is replicated in the other half to create a perfectly symmetrical result.

Arriving at a curvy mouse or camera body is faster with sub-D modeling than with solid modeling, but eventually the mesh needs to work with solids. Here, Siemens offers Convergent Modeling, that is the ability to combine disparate geometry data in a single model, including parametric and sub-D geometry as well as generative and reverse-engineered (3D scans). Sub-D modeling is included with both the Classic and Premium versions of Solid Edge 2021, so you don’t pay extra for it.

Here’s a run down of other new features:
Modeling: To make large assemblies faster, all parts are kept in a single assembly file. Internal relationships (like constraints) are remembered when copying and pasting parts from one assembly to another. Frames can have gaps to allow for welds, and semi-automatically add inward or outward end-caps with optional offsets and chamfers. Nesting now optimizes part placement on unusual shapes.

Sheetmetal: Multiple edges receive flanges by selecting and pulling them, and partial flanges can be constructed. The decals command places images and logos, even across multiple faces.

User Interface: The new Adaptive UI tracks commands you are working with, and then guesses at the next command you might need. CAD managers can take output from experienced users and give it to novice users as they learn to do specific tasks, with Solid Edge telling them the next command to employ.

Parts Catalog: Siemens licensed the Cadenas parts library to provide Solid Edge 2021 with 1,500 manufacturers’ catalogs. There is a visual search function that returns results sorted by percentage likelihood of matching your request.

This is an era where, it seems to me, some CAD vendors concentrate harder on collecting subscriptions from customers than improving their software. So it is good to see Siemens going all out by loading up this year’s release of Solid Edge with lots of new functions.

During the launch event, the host introduced Solid Edge 2021 by saying, “We bring the technologies of tomorrow to our customers today.” But some new features, like sub-D modeling and electrical design, were long needed to catch up with competitors AutoCAD and Solidworks, respectively. The improvements to fluid simulation were, I suspect, in reaction to Discovery Live fluid simulation added by PTC to Creo last year. Other new features, like the “AI”-enabled interface, are trickle-downs from earlier releases of NX.

Nevermind. Siemens places the emphases in the right areas. Design belongs on the desktop; subscriptions ought to be optional; automatic upgrades pausable and collaboration should be hostable anywhere. These are policies that reassure customers that their future with Siemens is a stable one.

Solid Edge 2021 is expected to ship in August. It is free to students (including self-learners) and startups (in business under three years, under $1 million in revenues). For everyone else, the 30-day free trial can be downloaded (after registration) from the Siemens PLM website.
https://solidedge.siemens.com