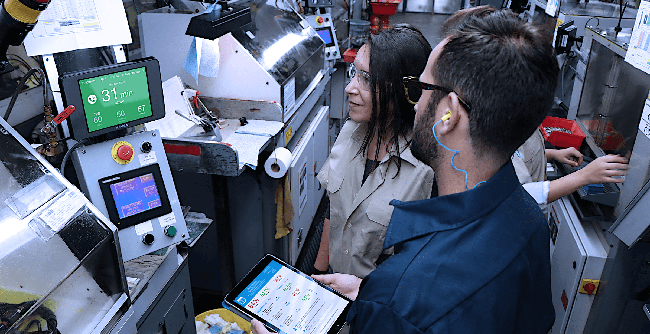 No matter how adeptly a manufacturing plant is run, they all experience some amount of unscheduled downtime. Inevitably, things happen that weren’t anticipated.

According to International Society of Automation estimates, nearly all manufacturing plants lose 5% of production due to downtime. For some, it can be as much 20%.

Even so, a 2017 ARC Advisory Group survey suggests those numbers are most likely an underestimation since most plants don’t calculate the cost of unplanned downtime. For those that do, the survey found that manufacturers didn’t measure unplanned downtime consistently and rarely in terms of monetary value. While every industry is impacted differently, the industry analysis firm pegs the global financial impact of downtime at one trillion dollars annually for process industries alone.

Unfortunately, one of the biggest barriers to preventing unplanned downtime is discovering why it happened in the first place. Often, the cause of an event – whether due to operator error, delayed maintenance, a slow change-over procedure or a combination of those – simply gets filed under the same generic “unplanned” label.

“When a process isn’t running, the biggest challenge is understanding why isn’t it running,” says Martin Cloake, founder and CEO of Ottawa-based Raven.ai. “If you only look at the machine fault code, for example, it would say ‘code ABC’ for three hours, but that doesn’t tell you what happened.”

Breaking down those three hours into defined segments, he says, allows manufactures to begin asking the right questions. For example, how long did it take for someone to notice a machine might be broken? Once noticed, and maintenance is alerted, how much time was spent waiting for the MRO staff to fix it? Did maintenance have what they needed to fix it? Once fixed, was the process waiting for the operator to come back and run the machine again? Only by dissecting downtime can plant operators hone in on the right answers.

“What often happens with inaccurate data from the shop floor is that people over index on the technical side of things,” he explains. “They think it’s their machines that are broken all the time when the reality is, if what’s really causing all this down time is uncovered, often there’s a lot of things that can be done on the operational side of things.”

That’s where Raven.ai’s industry 4.0 solution comes in. The company’s hardware and software are designed to account for how manufacturing operations “spend every single second of the day,” Cloake says. To facilitate that, the company offers its Raven Sense tablet, an IOT/Edge device that automates the process of labeling downtime, by tapping into multiple sources starting with the operators.

With that data, the company’s artificial intelligence software can discover patterns that would otherwise be missed. Designed with operators in mind, the device also provides real-time feedback on how production is performing relative to production targets.

As an example of what the system is capable of, Cloake points to an instillation of Raven’s technology at a Danaher plant that was losing 600 machine hours per month, it turned out, due to staff having to waiting for maintenance to arrive.

“Danaher is a fantastic company, so it’s not that they didn’t know how to schedule maintenance; they just didn’t know that was the critical issue that was stopping them from producing,” Cloake says. “So we help our clients identify what the most important cause of unwanted downtime is. We don’t solve the problem, people still solve that, but we help them make sure that they stand in front of the right problem, at the right time.”

But no matter how clever the technology, it’s worthless if it doesn’t gain engagement with operators on the plant floor, Cloake says – a lesson he learned early in his career. Shortly after graduating from McGill University with a mechanical engineering degree, his first manufacturing job was as a manufacturing engineer and production supervisor for a Montreal window blinds manufacturer.

It was his experience there that inspired Raven.ai, he says, and informed the how the company’s technology integrates into their clients’ manufacturing process. As a result, the Raven Sense tablet, he says, is a tool akin to a driver using GPS to navigate more efficiently.
“The GPS in your car is a perfect example of helping people perform and done in a way where it’s not about the report; it’s not about the graph,” Cloake says. “It’s about occasional high-value guidance to help people perform at higher levels.”

“For us, everything starts with the operator and a high degree of respect for the fact that they are producing the good that’s being delivered to the customer,” he adds. “So if operators are putting in effort to interact with a screen, it can’t exclusively be to feed a system full of data. They have to get something in return, which is to see people fix the problems they identify. Again, the way the continuous improvement game is played is by identifying and solving the right problems quickly.”

Ultimately, he says, companies often focus too much on the technology during their digital transformation journey instead of the real goal which is helping people become more productive. In support, he points to a Deloitte study that found productivity has stagnated globally on average since 2010 despite rapid technological improvements like the smart phone.

“What happened is that we went from looking at historical data on reports once in awhile to being bombarded with real-time data all the time and the ultimate goal of making ourselves more efficient got lost. We suddenly thought that implementing technology was the goal,” he says.

“But that’s not the goal,” he adds. “The goal is to produce and continuously improve. That’s good for consumers, good for profits and good for people on the shop floor because nobody wants to be running an inefficient process. So, if it’s good for those three things, that’s really the potential of Industry 4.0.”
https://raven.ai