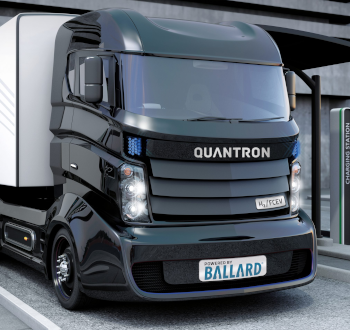 Ballard Power Systems announced that its heavy-duty fuel cell power modules have been selected by Quantron AG to power an upcoming line of the German company’s zero-emission electric trucks.

According to the companies, initial collaboration will focus on integrating Ballard’s FCmove family of fuel cell power modules truck platforms currently in development by Quantron, including a 7.5-ton delivery truck, a 44-ton heavy duty truck and a municipal waste collection truck. According to Ballard, its fuel cells will provide longer range and fast refuelling without diminishing the payload capacity of Quantron’s vehicles. Deployment of fuel cell electric trucks, Quantron says, is scheduled for the second half of 2022.

Established in 2019, Quantron is a spin-off from 139-year-old German firm Haller GmbH & Co. KG which specializes in service, maintenance and repair of vans, trucks, and buses. In addition to zero emission trucks, the company also recently announced its BEV Bus, a 12m low-floor bus will launch by the end of this year.
www.quantron.net