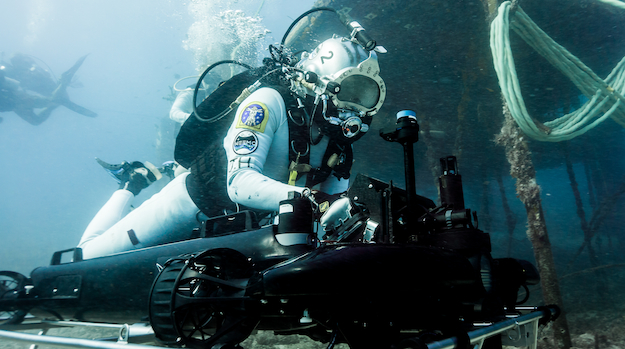 Typically, when you envision a demolition disposal expert, they’re either encased in bulky explosion-proof armor or gripping a pair of wire clippers feverishly deciding whether to snip the red wire or the blue wire. However, for elite naval Explosive Ordnance Disposal (EOD) technicians, who are commonly called upon to defuse underwater mines and hull mounted bombs, finding and working on an explosive in murky water or at night is challenging enough, never mind what color the wire is.

“The old way to doing that was literally the braille method, which meant feeling your way with your hands,” says Jim Garrington, president and CEO of Shark Marine Technologies. “So when you give a diver the ability to see underwater and know where they are, it’s a huge safety advantage.”

“We like to design things that don’t exist,” says Garrington. “Designing something that does exist is something we do only when we need to.”

Foremost among Shark Marine’s breakthrough devices is the Navigator, a combination hand-held sonar and underwater navigation system, originally developed for search and rescue teams in 2006. At its most basic, Garrington says the relatively small unit is an underwater Windows 7 computer connected to sonar and other sensors and a flotation block to keep the unit buoyancy neutral while diving. Via the Navigator’s display, its multi-beam sonar package delivers ultra-sound-like video of the surrounding terrain and objects.

“Depending on the unit, the furthest distance one can see is about 300 meters or 1000 feet, but keep in mind you’d better be looking for something big at that distance,” Garrington says. “We also have units at a very high frequency where you can put your hand in front of the unit and watch your fingers move. That’s great in zero visibility for guiding your hand to a particular spot. For those working on underwater mines, it’s certainly an asset.”

In addition to sonar, the modular Navigator can also seamlessly switch between multiple navigation options, including floating GPS, long baseline (LBL) acoustic positioning and Doppler navigation. Using the company’s in-house DiveLog software, divers can not only pinpoint their position, but also follow directions to a locations or perform grid searches over charts or satellite maps.

According to Garrington, the real potential of the Navigator and DiveLog software is realized when it’s paired with Shark Marine’s other singular device, the Mako Diver Delivery System. Similar in concept to other diver propulsion vehicles, the unit’s four, six or eight independent thrusters help reduce the fatigue of swimming long distances. However, unlike its namesake, the Mako DDS doesn’t have to constantly move forward.

“It’s more like a helicopter than an airplane,” Garrington explains. “With other units, when you stop, they drop and the diver is the one actually steering it. What we came up with is a unit that had the capability of five axes of motion; it can stop, hover, and go backwards or sideways as well as up and down in the water column. In short, it has a tremendous amount of control, more than anything out there.”

In fact, with the Navigator system serving as its brain, the Mako DSS becomes more of an underwater drone that can operate without a diver. This capability, Garrington says, makes it useful for a number of diverse missions.

“We can actually send the Mako DDS in with the diver, drop them off and then have it come back again,” he says. “For that matter, it can deliver cargo to onshore personnel underwater or, in the case of an shoreline extraction, it can go in, rendezvous with them and bring them back to a ship beyond the horizon.”

To date, Garrington says 16 NATO and NATO-friendly navies around the world, including the U.S., Canada, the U.K. and Australia, rely on the company’s technology in one form or another. That military contract winning streak has also propelled the small Ontario firm onto Canadian Defence Review’s Top 50 Canadian Defence Companies for the first time this year—a short list of Canada’s innovative contractors including CAE, Bombardier Aerospace and Irving Shipbuilding.

In the future, Garrington says the company will continue to develop aquatic equipment controlled by the company’s DiveLog software, including Shark Marine’s SeaWolf and D.A.S. Boat ROV lines and adapting their equipment to customer needs. Most recently, NASA integrated Shark Marine’s equipment into the its NEEMO (NASA Extreme Environment Operations) project, a multi-mission initiative in which astronauts and engineers live in an underwater habitat called Aquarius to simulate conditions in zero gravity and prepare for future space exploration.

“There was a time, when underwater equipment like this required a Ph.D. to operate,” Garrington says. “Our goal is make it so I can tell someone what to do in three minutes, have them hop in the water and be able navigate to and document a target. We just want to make it really easy for the divers, especially the military divers, because they have a lot of other more important things they are trying to do.”
www.sharkmarine.com