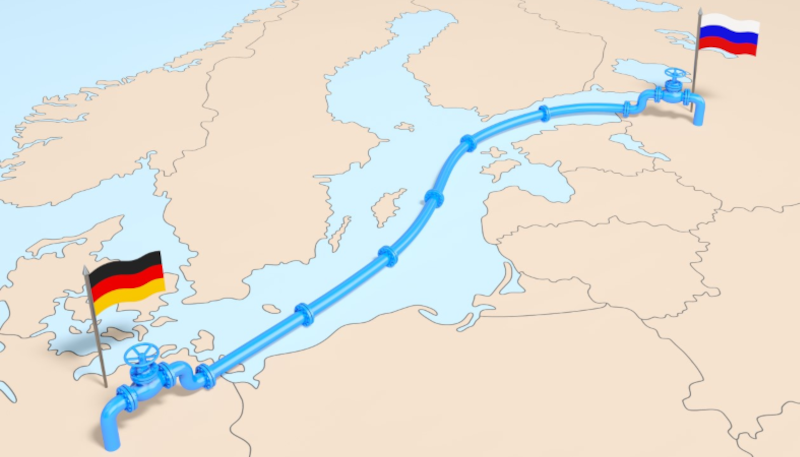 MONTREAL – The fact that part of a Russian gas pipeline remains in Germany after it was returned to Europe by Canada reveals the dishonesty of President Vladimir Putin, the Canadian and German foreign ministers said Wednesday.

“We called his bluff,” Canadian Foreign Affairs Minister Melanie Joly told reporters in Montreal about the Russian president, at a joint press conference with her German counterpart, Annalena Baerbock. “It is now clear that Putin is weaponizing energy flows to Europe.”

Since Canada allowed the return of a turbine used in the Nord Stream 1 natural gas pipeline, which runs under the Baltic Sea from Russia to Germany, Russia reduced natural gas supplies to Germany to 20 per cent. The ministers say that shows Putin is using energy as a weapon of war.

“It needed to be clear for the world, so (Putin) could not use the pretext of a turbine stuck in Montreal as the reason for why he was reducing the flow of Nord Stream 1,” Joly said later in the day at an event with Baerbock hosted by the Chamber of Commerce of Metropolitan Montreal. “So that’s why we decided to send it back.”

In mid-July, the Liberal government drew criticism for granting Siemens Energy an exemption on sanctions against Russia and allowing a turbine – which had been in Montreal for repairs – to return to Germany and then eventually to Russia for installation in the pipeline.

The Ukrainian government accused Canada of setting a dangerous precedent that risks compromising economic sanctions imposed on Russia for the invasion of Ukraine.

“What we’re seeing right now is Putin was trying to sow division within the alliance, within the G7,” Joly said.

German Chancellor Olaf Scholz inspected the turbine Wednesday in Germany and said “there are no problems” blocking the part’s return to Russia, apart from missing information from Russia’s state-controlled gas company, Gazprom.

Baerbock said the paperwork is being fixed and accused Putin of attempting to use the turbine issue to divide countries that support Ukraine.

“(Putin) tried to split us,” she said. “He tried to play games with us and now the whole world can see crystal clear that he’s just using energy as a game play.”

Canada has granted exceptions to Siemens Energy for six turbines.

Germany relies almost exclusively on gas for heating, Baerbock said, adding that it was a “mistake” to dependent on Russia for energy.

“This has been a mistake to be so dependent on Russian cheap gas,” she said, adding that her government is committed to phasing out its use of Russian natural gas and will be looking to Canada.

“This partnership has to rely on common rules, on common standards, and this is why, for us, Canada is one of the most important partners,” Baerbock said.

Joly told the chamber of commerce audience that Germany is looking to invest in liquid natural gas projects in Canada, adding that she has met with the Quebec, New Brunswick and Newfoundland and Labrador governments to discuss hydrogen projects that could also lead to energy exports.

Earlier in the day, the two ministers toured a grain silo at the Port of Montreal. “Canada has increased, this year, our domestic grain production by 30 per cent,” Joly said, adding that wheat production is up seven per cent.

“We are sending mobile grain silos in Ukraine, so that way we don’t lose production,” she said. “We’re sending ships to get the grain where it is needed and we’re increasing our donation to the (UN) World Food Program.”
www.nord-stream.com