“Delcam has the largest development team in the CAM industry.
Unlike some of our competitors, we have continued with this high level
of investment during the current downturn, so we still have a constant
stream of new innovations in our programs,” explained Delcam Canada
vice president Mark Cadogan. “We hold these regular events to ensure
our customers, and prospects alike, are aware of these new developments
so that they can gain the maximum benefit from Delcam’s software.”

Enhancements
were shown across Delcam’s broad range of CAM products, including
FeatureCAM for feature-based programming of mills, lathes and complex
multi-tasking and multi-axis machines; PartMaker for turn-mill
equipment and Swiss type lathes, and PowerMILL for high-speed and
five-axis machining.  Together, these programs comprise the world’s
most comprehensive range of CAM software from a single supplier. 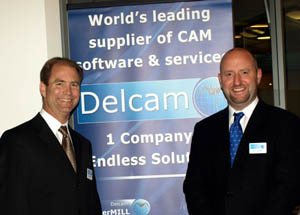 The
most significant of the new developments was the latest version of
PowerMILL, which incorporates support for parallel processing on
multi-core computers. The result is even faster calculation times than
PowerMILL 9, providing dramatically-increased output.  Individual
toolpaths can be generated more quickly and the user can prepare data
in the foreground while the computer calculates toolpaths in the
background.  Furthermore, the computer will continue with a series of
calculations automatically during the user’s breaks or overnight.

Delcam’s
range of quality control software was also featured, including the
latest release of PowerINSPECT, the world’s leading
hardware-independent inspection software. This incorporates a
completely new interface for “simple” measurements. Other enhancements
include more flexible handling of geometric data sets, easier methods
to add extra data and improved reporting. All these new features make
it even faster to spot any errors, saving time and money on having to
carry out corrections.

A more recent expansion for Delcam has
been into Orthotic and Dental CADCAM solutions. A number of new
functions were shown that have been added to these programs recently in
response to requests from the various companies that are supporting
their development.

The day was rated as a great success by
Cadogan. “We were able to show our software range to existing and
potential customers, and to several of our machine tool partners,” he
reported.  “They all seemed very impressed with what they saw.  I am
sure those in attendance left with the impression that Delcam are
making sure both that our products are here for the long haul and that
we have every intention of coming out of the current economic times
stronger than most of our competition.”
www.delcam.com