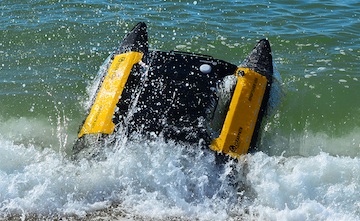 A large part of that work involves a process called dewatering, by which water in the pond is removed in proportion to the new tailings added. Calculating how much water to remove, however, requires knowing how much tailing sentiment has settled on the bottom of the pond.

Conducting detailed depth measurements, known as bathymetric surveys, can be hazardous work. Typical measures entail technicians, equipped with sonar or probes, cruising the pond in a tin boat to take readings from various locations—an unappealing and expensive task that often results in inaccurate or incomplete data.

Into these dangerous waters sails Clearpath Robotics, a Kitchener, ON-based robotics firm specializing in unmanned vehicles for research and development. Among its turn-key autonomous vehicles, the company is best known for the Kingfisher, an Autonomous Surface Vehicle (ASV) that can survey tailing ponds and other remote or hazardous water environments.

“There are some fairly significant health and safety concerns with having people in fast, cold or polluted water, so using a robotic system helps minimize that safety concern,” says Clearpath Robotics CEO, Matt Rendall. “And because it’s so time consuming, the number of data points collected in a manual survey is quite low. What we’ve found with Kingfisher is that, because we can collect hundreds of times more data, we are able to provide much more detailed analytics.”

Water ‘Bot
Kingfisher grew out Rendall’s university studies while he and his Clearpath partners—CTO Ryan Gariepy, COO Bryan Webb and VP of Hardware Patrick Martinson—were undergraduates in the University of Waterloo’s mechatronics engineering program. Determined to turn their shared passion for robotics into a business, the group established the company and landed their first contract, a professor who needed a water borne robot for water data collection, before graduation.

“Originally, we were only interested in land robots, so when we finished that first contract, we went back to that,” Rendall says. “But people kept coming to us for water and, after three or four requests, we discovered a fairly substantial market opportunity.”

Now in its second generation, Rendall says the present Kingfisher M200 is designed to maximize portability, agility and reliability while minimizing the manpower needed to operate it. Measuring 1.3 meter long and just under a meter wide, the ASV weighs approximately 29 kilograms, making easy for one person to transport and deploy.

In the water, the vehicle’s 14.4V NiMH battery powers twin water jets (one at the back of each pontoon) that not only propel the electric craft at up to 3.3 kn but also steers the Kingfisher without rudders. This, says Rendall, allows the CSV to navigate shallow waters conventional boats couldn’t while its low center of gravity keeps it stable in variable conditions.

“For our use case, we needed a design that would allow our boat to move in a very slow and controlled manner through fast moving water so we created a semi-planing/semi-displacement hull,” Rendall explains. “The reason we went with the catamaran design is that we want to have high stability for the sensors on board since the less stable the boat, the more disturbances in the data collection.”

While an operator can take control of the Kingfisher at any time, the robot’s real advantage is its autonomous control system. Employing off-the-shelf processors coupled with the open source Robot Operating System (ROS) allows the ASV to carry out its mission largely unattended.

“When you assign our system a body of water, it calculates an optimal mission plan to collect the data necessary for the survey on its own,” Rendall says. “But, if the operator on shore observes strange data coming from the vessel, they can manually override the system and collect more robust data in that particular area and then allow the system to go back to its ‘flight plan.’”

Mining Data
Given its turn-key design, coupled with its customizability and unique place in the market, the Kingfisher has seen rapid uptake by the mining industry and researchers, Rendall says. Most recently, international engineering consulting firm, AMEC, employed a Kingfisher to collect bathymetric data at a PotashCorp tailing pond in Atlantic Canada.

In the process, the company said it not only limited risk to its staff but collected 89,000 usable data points in 12 hours. According to AMEC, that translates to approximately 100 times the data in a fraction of the time and at 60 percent of the cost of manual methods.

In addition, the Government of Canada recently awarded Clearpath a contract worth more than $100,000 through the Build in Canada Innovation Program (BCIP). Rendall says the Kingfisher will be used by Environment Canada for discharge measurement in flood plains to monitor flood risk.

In fact, in only four years, Clearpath’s customer base has grown to include leading researchers in more than 25 countries and hit profitability within 18 months of its founding—a distinction that recently won its CEO the Young Entrepreneur category at this year’s EY Entrepreneur Of The Year Awards. For Rendall, the company’s success comes down to delivering a flexible solution without bogging customers down in the complexity of autonomous robotics.

“We want to offer an 80 percent solution ready to go out of the box; the remaining 20 percent is customization toward the specific application,” Rendall says. “No two problems are the same. But in our pursuit of the state-of-the-art, what we want to offer to our customer base is a common starting point that lets them get prototypes to market faster for less money and with less risk.”
www.clearpathrobotics.com