Siemens has been loud and proud in declaring that CAD has no place on the cloud. Unlike its MCAD competitors – Autodesk, Dassault Systemes, PTC – Siemens keeps its Solid Edge and NX software firmly on the desktop, because that’s what makes sense to users.

Nevertheless, some kind of cloud connection is necessary today, even if it’s just Dropbox for sending files. And so, since 2007, Europe’s largest industrial manufacturer has spent ten billion dollars acquiring software, with most of the more recent acquisitions being software that runs on remote servers (cloud).

And it is necessary. You can’t have collaboration without a network connection and a central facility for verifying participants and distributing comments and files. But firms cannot provide customers with ongoing network access without also capturing ongoing payments from them. Software firms employ the term “SaaS,” Software as a Service, to describe what we regular folk call annual subscriptions.

The most significant SaaS acquisition by Siemens was Mendix, which Siemens got running on MindSphere to create Xcelerator. Mendix is a low-code programming environment, which has become the API (application programming interface) for customers, external firms and Siemens. MindSphere is the operating system on which Siemens runs its cloud operations. And Xcelerator is the TeamCenter for the new era.

TeamCenter PLM software has been very successful for Siemens, because the company makes no attempt to lock customers into it, as some other CAD vendors have done. This platform-agnostic approach makes sense for Siemens because, although it owns NX and Solid Edge, it also uses other CAD programs across its divisions. Being multi-CAD internally makes it easy to be multi-CAD externally.

The company has preserved TeamCenter’s openness with Xcelerator; it works with Solid Edge and NX, and can be made to work with everything else. Then Siemens came up with its own twist on SaaS: XaaS, Xcelerator as a Service, which is being deployed for all its software, including as an extension to Solid Edge 2023.

The Stepwise option in SE 2023’s Visual Explode command explodes sub-assemblies first, then all entities, such as in this exploded view of the Yanu robot’s internal assembly.
(Photo credit: Siemens)

Solid Edge in the Cloud
XaaS-ifying Solid Edge means extending its capabilities to those shown by the figure below. (The desktop part of Solid Edge does the product development tasks in the upper left corner.) As Dan Staples, vice president of mainstream engineering R&D at Siemens, put it during the Solid Edge 2023 launch event in October, in perhaps a subtle dig at cloud-obsessed competitors, “It’s not about the cloud itself, but what you gain from it, and collaboration is the key.”

Solid Edge will continue to get new functions on the desktop, with additional capabilities added through the cloud and shared with NX, with Xcelerator as the universal platform. Something like 2,000 apps are available from Siemens and third-party developers, starting with a subscription to Xcelerator Share that includes 500GB of online storage per user.

The bad news is that it will cost you extra. The fees were not announced, but they involve you paying for tokens, and then each program costs a certain number of tokens. I assume the more cloud-compute power needed, the larger the number of tokens – as is the case with other CAD vendors employing tokens. Siemens allows tokens at a site license to be pooled, so that some users can use more of them when others need fewer.

Siemens spins this as “Value-Based Licensing,” where you choose add-ons as you need them, instead of buying them. Titles available today include Generative Design Pro, point cloud visualization, electrical routing, PCB collaboration, advanced PMI, simulation and XpresRoute. Other MCAD packages include some of these kinds of extras at no extra cost.

Siemens targets Solid Edge to small and medium-size businesses with the 3D-capable editions start at $75/month, plus Xcelerator to add functions through the cloud, which Siemens sees as providing digital transformation to “advanced” SMBs.

“Honestly, those that don’t [consider digital transformation] risk being left behind,” says Siemens in a mildly threatening manner – as do as other MCAD vendors looking for ways to sell more services.

But here’s the flaw in Xcelerator: The typical customer using Solid Edge – the one- and two-license machine shops – aren’t interested in digital transformation, digital threads, digital twins or any other software outside of CAD and CAM. Dassault found this out the hard way, after Solidworks users, by and large, rejected its X-series of digital transformation add-ons. I consider Xcelerator, however, suitable for NX shops.

Solid Edge 2023 on the Desktop
As to desktop Solid Edge 2023, Siemens has added a number of enhancements, not least of which is its new user interface, even a new icon, done in Siemens’ corporate color, viridian green. Some commentators suggest the UI change gives Solid Edge, NX and the Xcelerator platform “a unified look” across applications. To me, it looks like they borrowed the UI of Microsoft Office. 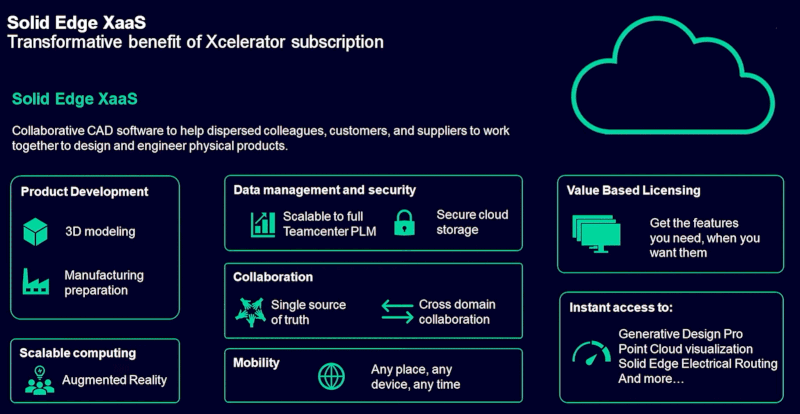 Another big change is that some direct editing functions – formerly available only through Synchronous Technology (ST) – have been copied to Ordered Mode, known as “history mode” by other CAD vendors, such as using the Steering Wheel to move, rotate and offset. This doesn’t particularly surprise me, as ST is powerful but so difficult to understand that hands-up surveys at user events show very few employ ST.

Among the new modeling functions in SE 2023, there are Automatic Regions that combine trimming and projecting of sketches. You can now switch between extruding and cutting modes by tapping the spacebar. Swept Cutout fully or partially cuts through one or more parts along a path. The Visual Explode command’s Stepwise option first explodes sub-assemblies in sequence, and then all entities as you continue to drag a slider. And faces can have any of a thousand material looks, like plastic and metal, during editing mode.

SE 2023 now includes MBD (model-based design) and PMI (product manufacturing information), which avoids the need to use 2D drawings for production. The two documentation techniques define materials, 3D measurements, and tolerances directly on 3D models, which compatible manufacturing machinery can read. Siemens VP Staples calls this “moving intelligence out of the [2D] drawing and directly into the [3D] model.” It has been a slow, multi-year implementation challenge, but now most MCAD programs do it.

Solid Edge can now automatically dimension the entire model after first specifying the first, second and third datum planes. As well, SE 2023 arranges existing dimensions so that they take up as little space as possible. Oft-used call-outs and other notes can now be stored for reuse. 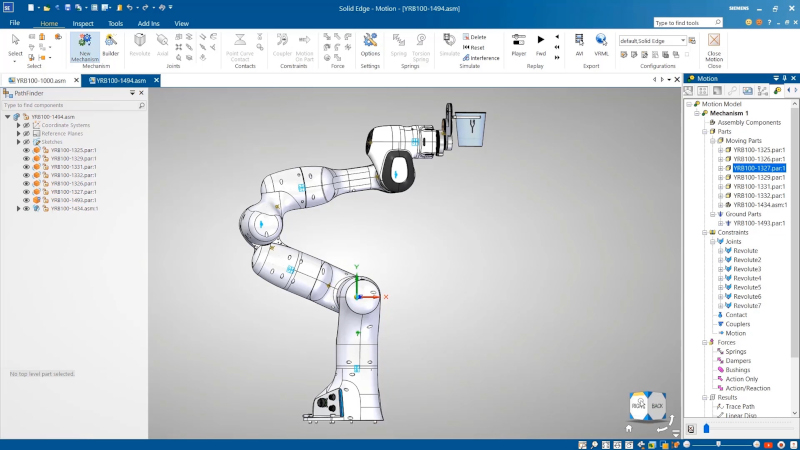 You can optimize parts, assemblies, imported STL files and converted mesh models with generative design studies using the Simcenter Nastran solver inside Solid Edge. This minimizes the amount of material need while adhering to design constraints.

Solids and surfaces from Solidworks models can now be inserted into Solid Edge assemblies as internal components, as well as JT, STEP and Parasolid files. Solid Edge stores them in its files, so there is no need to keep them linked to external source files.

Native Solid Edge files can be transferred to NX and Motion for further analyses, including deeper information like joints, links, gravity and mass properties. This is done by establishing a link to the original Solid Edge file, and updates are transferred to NX with an update source command. Moving data to other programs like Process Simulate requires translation to JT and PLMXML formats.

Despite all the hype these days over VR/AR in certain quarters, augmented reality received the scantest of mentions.

Solid Edge 2023 is shipping now. It requires Windows 10 Professional or later running on computers with at least 16GB RAM. The best news is that Siemens continues to sell permanent licenses of Solid Edge.
https://siemens.com

Ralph Grabowski writes on the CAD industry on his WorldCAD Access blog (www. worldcadaccess.com) and has authored numerous articles and books on CAD and other design software.