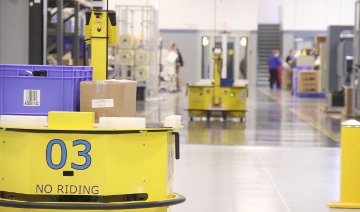 In the sphere of industrial robotics, Automated Guided Vehicles (AGVs) have been around since the 1950s, serving primarily as semi-automated material handlers for tugging light to bulky raw materials to the manufacturing line or large quantities of finished product to shipping bays.

While these “unmanned forklifts” help save on labor costs, their utility is somewhat limited. Traditional AGVs only travel set paths demarcated by wires, guide tape or another guidance solution. In addition, they don’t address larger manufacturing issues, such as having to store excess material at the manufacturing line. They can also introduce problems of their own such as dealing with pathway blockages, maintaining power levels and managing traffic congestion.

Enter Grimsby, Ontario-based RMT Robotics and its intelligent AGV called ADAM. Since their introduction in 2005, the robots have been defining a new class of mobile robot, capable of largely autonomous operation. According to Bill Torrens, director of the ADAM Systems Group, RMT’s ADAM robots facilitate a higher level of lean manufacturing.

“ADAM allows companies to deliver the needed quantities of material, when and where they are needed—basic principles of lean manufacturing,” he says. “But, even in 2012, many companies still use manual process for the transportation of raw and work-in-process material between an automated storage and retrieval system and an automated production machine. When you connect these ‘islands of automation,’ you not only reduce labour but, more importantly, you also improve product quality and increase throughput.”

To facilitate this, RMT’s ADAM differs from traditional AGVs in that the cylindrical robots are designed for maximum flexibility. For example, they are fairly small; from floor to deck, the robot stands about 510 mm high and is 1020 mm in diameter, giving it access to most floor aisles and walkways. Constructed largely of aluminium, the units are also relatively light, but can carry up to 300 kg. In addition, individual servo motors power its two drive wheels, giving the unit a 0 turning radius and a maximum speed of 1.5 m/s. More importantly though, Torrens says, the ADAM robot is a random start/random end unit, capable of finding its own way from any point A to any point B by any route available. When first placed in an unknown location, the ADAM robot uses a technique called “Simultaneous Localization and Mapping” (SLAM) to incrementally build a map of its environment. Once the map is complete, the unit’s laser range finding system, servo encoders and gyroscopic motion sensors allow the robot’s internal industrial computer to compute the unit’s location, “visualize” where it needs to go and determine how best to get there.

Although an optimized route is planned, the robot’s Open Path Navigation feature allows it to recalculate new pathways on the fly if material or personnel block the original route. ADAM units are also self-maintaining in the sense that it monitors its power level and docks with variably-placed recharging stations when the opportunity allows.

Of course, ADAM units rarely work alone; each unit communicates with others through a wireless network to transmit new map information and resolve routing conflicts. While traffic management is distributed between ADAM units, dispatching is centralized and mission-based; operators call for an ADAM unit and assign new destinations via the robot’s onboard controls or through an HMI system. Most recently, the company implemented an interactive text-to-speech or sound file audio component, called ADAM RAP, to help it interact with humans.

“One of the things we’ve found with a vehicle with no fixed path, human beings don’t know what ADAM is doing and why it’s doing it,” he says. “So we created an interactive capability for the vehicle so that, within a human environment,
ADAM could say, ‘Excuse me, you’re standing on my destination. Can you please move aside?’
www.adamrobot.com