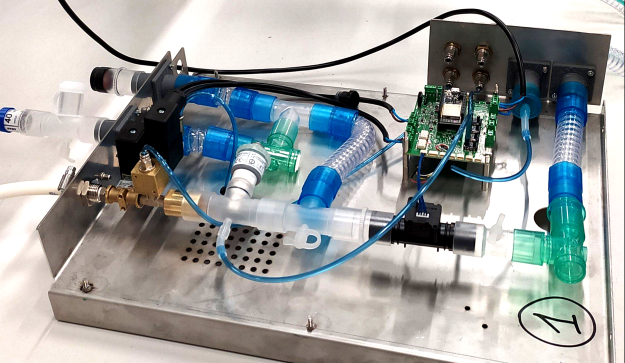 The Mechanical Ventilator Milano is an open-source ventilator in development in Canada by the Ventilators for Canadians consortium, which includes JMP Solutions. (Photo Credit: JMP Solutions).

During this pandemic, front-line health care workers are critical to saving lives. To do that, however, they need the right healthcare equipment and plenty of it. Given the projected shortages of critical medical supplies, including ventilators, masks and other personal protection equipment, Canadian engineering companies have been mobilizing their teams to battle COVID-19, with promising results.

Inspired by the 1961 Manley ventilator, the MVM controls the flow of gas via two normally-closed proportional valves that alternately open and shut throughout the respiratory cycle. Pressure is dynamically adjusted based on a complex fail-safe feedback control loop implemented by multiple pressure sensors controlled by an Arduino-compatible micro-controller in conjunction with a Raspberry Pi to handle the user interface.

JMP President and CEO Scott Shawyer explains that MVM ventilator’s simple design allows it to incorporate readily-available components, which not only speeds assembly but also makes it easier to source the necessary parts. “[The MVM] doesn’t need to look as pretty or be as compact as a conventional ventilator,” he adds, “nor have all the functionality.”

While it may suffer on looks, preliminary simulation tests run on the MVM showed that it out-performs commercial ventilators in regard to COVID-19 patients due to two key differences.

First, the MVM maximizes intake flow at the start of the inspiration phase which helps reopen the lung’s small alveoli. However, pressure is increased gently and evenly during the last fifteen percent of air intake which prevents lung trauma and minimizes the long-term muscle fatigue that can happen

According to Shawyer, manufacture of the MVM will begin now that approval has been gained from Health Canada. In late April, Shawyer said he expected JMP Solutions to begin mechanical assembly of the units in early May while Ontario-based electronic manufacturer, Vexos, would install the electronic components, test the machines and ship.

“There are multiple streams happening in parallel, with teams working together but also independently: Documentation, regulatory compliance, mechanical, electrical, software, testing, etc.,” he adds. “We have about seven calls every day involving people in multiple countries, and we are working out roles and responsibilities. And every day it gets better and better.”

The TidalPump
Meanwhile, Innovative Automation in Barrie, ON has created a ventilator called the TidalPump, which is also awaiting approval from Health Canada. Designing a medical device was a big change from design for automotive manufacturing, says Trefor Armstrong, the company’s application specialist. 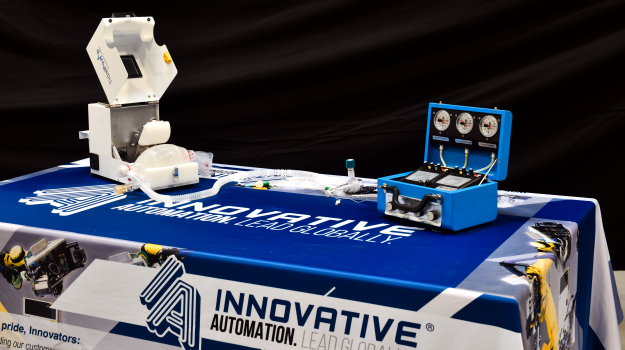 “We were able to speak with a respiratory specialist at the very beginning of the project to understand exactly how the lung functions and what’s needed in a mechanical ventilator,” he explains. “In conjunction with Dr. Gantous at St. Joseph’s hospital in Toronto, we came up with a simple way to actuate a resuscitator bag. We called our device the TidalPump because we’re pumping a resuscitator bag to produce tidal volume.”

The Innovative Automation team chose not to incorporate sensor feedback into the design, as that would place it in a medical device category requiring much more testing. The design did need to be compact and use lightweight materials where possible. At the beginning, a lot of the prototype’s parts were 3D-printed before being machined out of appropriate materials.

In medical design, a material’s ‘appropriateness’ relates to its ability to be sanitized by standard disinfectants and whatever disinfectants health care facilities had to start using as the pandemic progressed. Armstrong says workers at one hospital they spoke to had been using bleach wipes after running out of the usual alcohol cleaner.

Armstrong is happy to report that finding other parts needed for the TidalPump has gone very well, as has the planning for their production in large quantities.

“Some of our suppliers had their overseas plants manufacturing more of the product in case we needed more than what was in their North American stock,” says Armstrong. “Some suppliers even created custom part numbers for us by manipulating a product they already had to meet our needs.”

Masks and more
For machine builders, like Eclipse Automation, the medical sector has been a key part of their business for years. Now, however, the company is applying that expertise to expedite the build of machines for making n95 masks. The Cambridge, ON automation firm recently announced it had secured North American rights for the equipment from China’s Harmontronics.

CEO Steve Mai believes that to truly achieve security in the making of protective health care equipment, the entire process must be controlled from the start. He explains that Eclipse’s role in this project is to facilitate any modifications necessary to ensure the machines are within the regulatory standards for North America, from an electrical and safety point of view.

“It isn’t really a challenge for us; it is part of our expertise,” he says. “Coordinating and validating that a system does what is expected of it by our customers is a crucial part of our service.”

With its partners, Eclipse is ensuring the machine’s motors, electrical systems and so on meet UL certification standards, so validation proceeds quickly. The company is also ensuring that installation, commissioning and training will be in line with North American standards. Raw materials for the masks are being certified as well.

Eclipse has also been called on to build machines that produce disposable medical ‘test cards’ for evaluating a patient’s condition, such as respiratory capacity. These cards hold reagents which react with a droplet of blood; the healthcare professionals can then read the results using a handheld device. Mau reports that the design for the machine was finished in April.

In the design process, Eclipse uses its ISO-integrated GAMP (Good Automated Manufacturing Practices) methodology, designed to interpret validation requirements and apply them to all aspects, directly or indirectly, of the customer’s desired automation processes.

Multiple Fronts
Cambridge, ON’s ATS Automation Tooling Systems has been working on many fronts to help stem the pandemic. The company is working with a large U.S. automaker, for example, to reconfigure its manufacturing facility and has delivered equipment to the site for large-scale production of filtering facepiece respirators.

Developed by ATS Automation, this rapid tube-filling machine can fill products with an alcohol content of up to 70 per cent at an output of up to 4,200 tubes per hour. (Photo credit: ATS Automation)

In Italy, ATS company Comecer is developing an automated bio-decontamination system for hospitals based on the same technology used in Comecer’s aseptic isolators. This will allow fast decontamination of hospital rooms and equipment, explains ATS CEO Andrew Hider, as well as potentially enable reuse of protective items such as n95 masks.

IWK, an ATS company in Germany with expertise in packaging solutions, has developed a rapid tube-filling machine for protective hygiene products including hand sanitizer. Hider says this special FP10 Tube Filler can fill products with an alcohol content of up to 70 per cent at an output of up to 4,200 tubes per hour.

Speed has obviously been of the essence in the design and manufacture of these machines, and Hider says they are being produced in batches to ensure a delivery worldwide within two to three months.

“The challenges are mainly to get all required sub-suppliers and parts manufacturing equipped with the necessary capacity within shortest time, which the team did a great effort together with our partners,” he says. “IWK will further invest in supporting global COVID19 actions and build up capacity to be able to supply the machines to all parts of the globe within shortest time possible.”
www.jmpsolutions.com
www.innovativeautomation.com
www.eclipseautomation.com
www.atsautomation.com