The US$400 million facility to process cathode active materials for GM's Ultium batteries. 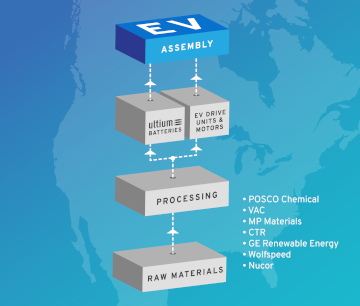 TORONTO – General Motors Co. and South Korea’s Posco Chemical announced a deal Monday to build a plant in Quebec to produce material for batteries to be used in electric vehicles (EV). The companies said the new facility in Becancour, Que., will cost US$400 million.

It will produce cathode active materials (CAM) for GM’s Ultium batteries and will be a standalone factory, with the materials being moved to Ultium plants in the U.S. where the battery cells will then be made.

“It is so exciting to see GM Canada and Quebec playing a key role in building the emerging ‘mines to mobility’ EV battery ecosystem in North America,” Scott Bell, president and managing director of GM Canada, said in a news release.

The company said CAM consists of processed nickel, lithium and other materials, and will ultimately help power electric vehicles such as the Chevrolet Silverado EV and GMC Hummer EV.

CAM represents almost 40 per cent of the cost of every EV battery.

Site preparation and construction are scheduled to begin immediately and will create around 200 jobs.

This announcement comes after GM and Posco agreed to form a CAM processing joint venture in December and build a factory in North America.

Quebec was chosen for this new facility because of several advantages, according to David Paterson, vice president of corporate and environmental affairs at GM Canada.

“Quebec’s low greenhouse gas (GHG), low-cost electricity is really important,” he said in an interview. “In addition to its environmental standards, great logistics links and a well-educated workforce are some of the other reasons why we chose Quebec.”

Paterson said he was pleased that GM’s first CAM investment is in Canada because of the country’s natural resources combined with Canada’s desire to do more to process those resources.

“Now Canada’s mining industry can jointly work with us to not only mine the commodities in Canada, but also add value to them,” he said. “That will create more jobs and more spinoffs and allow the industry to be a part of this whole integrated North American auto sector.”

Canada is starting to see the fruit of constant pitching by the different levels of government to players around the world, said Flavio Volpe, president of the Automotive Parts Manufacturers’ Association.

“We are going to see critical mineral extraction and processing, cell manufacturing, cathode and anode investments as well as electric vehicle program commitments,” he said in an interview.

Meanwhile, Germany’s BASF has also announced plans to build a cathode material plant in Quebec where it will produce and recycle CAM.
www.poscochemical.com