It aims to bridge the gap between desktop and industrial 3D printing aimed at small businesses currently priced out of AM.

The heated chamber the Method utilizes.

MakerBot recently launched the Method, a performance 3D printer bridging the gap between desktop and industrial 3D printing by bringing features that were previously only available on industrial 3D printers to professionals at a significantly lower cost. Method leverages industrial technologies and expertise from Stratasys combined with accessibility MakerBot is known for.

“We looked into the professional space and tried to, using our customers, identify the gaps in the market and what we discovered was that there is no real professional tool which is very accessible and affordable,” said MakerBot CEO Nadav Goshen in an interview with Design Engineering. “There is a real shortage of professional tools that are approachable so we looked at our portfolio and decided we needed to develop a new platform and that platform is what Method turned out to be,” he said.

Goshen went on to explain that MakerBot has identified two specific areas in which the Method would be applicable: Small businesses being priced out of the competitive AM market and large organizations using a “tool that can help a workforce experience and think about the AM space in a different and unique way.”

Method is designed to deliver industrial reliability and precision by carefully controlling every aspect of the 3D print environment, resulting in repeatable and consistent parts with ± 0.2 mm dimensional accuracy as well as vertical layer uniformity and cylindricity. The dual extrusion system found in Method combined with water-soluble PVA provides a superior surface finish and enables unlimited design freedom and unrestricted geometries, such as complex overhangs without scarring.

All photos courtesy of MakerBot

A dual-drive gear system grips the material securely while a powerful 19:1 gear ratio provides up to 3X the push force of a typical desktop 3D printer. This allows Method to provide a consistent feed of material into the hot end to produce consistent geometry. The new lengthened thermal core is up to 50% longer than a standard desktop hot end to enable faster extrusion rates and allows for smooth extrusion throughout its high-speed movements and accelerations.

“For MakerBot Dual extrusion started with the rep1 in 2011, and we brought dual extrusion back with the replicator 2x but it was always kind of an experimental thing,” said Dave Veisz, VP Engineering for MakerBot. “On this machine, we recognized we needed dual extrusion, and to be able to print with support because that’s what gives you the geometric freedom to print really any shape.” 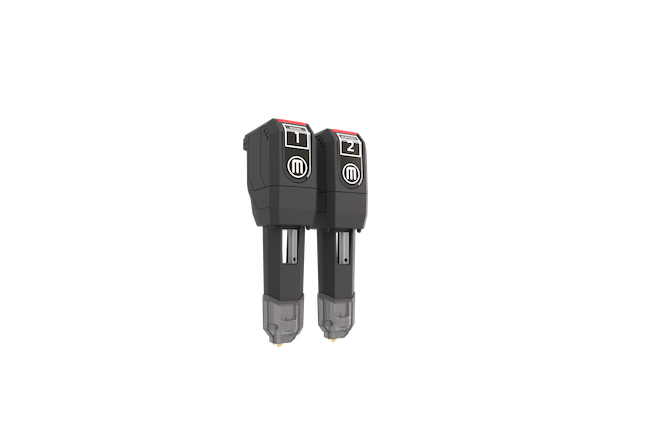 The dual extruders used on Method.

One of the big things MakerBot changed with Method’s dual extrusion is the automation of calibration. Traditionally, the calibration of the x,y and z axis’ from nozzle to nozzle are done manually and given the critical nature of having those planes be accurate, it can be a time-consuming and tedious process. According to Veisz, each extruder acts as a probe and is able to find it’s position in space via an automated software script.

“To get the accuracies we were going after we knew we couldn’t rely on the user doing that and also we needed to have better resolution than what was capable through traditional method,” Veisz said.

Delivering industrial-level performance at one-third of the first-year cost of ownership of an entry-level industrial 3D printer, teams can reduce design risks by testing and validating prototypes with accuracy early and often.

Built-in sensors monitors humidity and alerts users of any changes to the environment—a feature previously only available on industrial 3D printers. This feature is especially crucial for water-soluble PVA, which quickly absorbs moisture when left in the open with devastating consequences on print quality.

Precision Materials include MakerBot Tough, MakerBot PLA, and MakerBot PVA. The first specialty material on the platform is PETG, one of the most widely used polymers with excellent engineering properties, with more to follow.