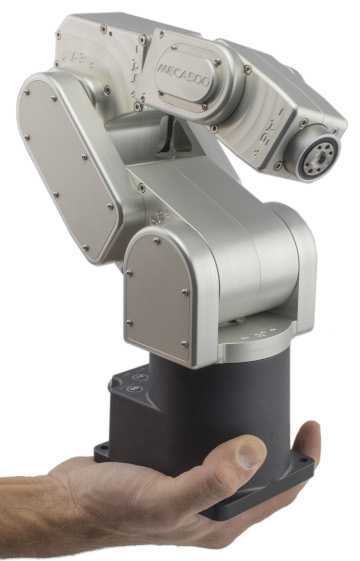 Mecademic has released firmware version 8.4 for its Meca500 robot. As part of the update, rotating Joint 6 of the company’s industrial 6-axis robotic arm beyond ±180° is no longer limited to Joint-move-commands. The new firmware allows both point-to-point and linear commands to be used.

Apart from the benefit of no longer being limited in Cartesian space and requiring switching to Joint commands, the company says Meca500 applications are now easier to implement directly for any applications that require moving Joint 6 beyond the previous default limits.

In addition, the firmware update allows users redefine the software range limits of individual joints, as well as lower their torque limits. Although the robot can now be made to stop with light contact, this feature was not designed for collaborative applications, the company says.

Real-time monitoring data has also become an official feature. Real-time data allows users to stream data in real-time (up to 1ms) over port 10 001 in TCP/IP. The data is also user-configurable (Positions, Torques, Velocities, etc.) This feature enables the user to receive the real-time status of the robot for better monitoring and coordination with other components.
www.mecademic.com