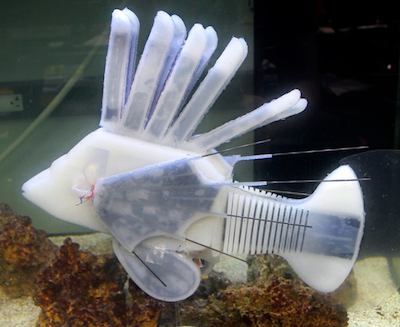 Developed by researchers at Cornell University, this lionfish robot, powered by hydraulic and electrolytic “blood,” can swim untethered for a calculated 36 hours. (Photo credit: James Pikul)

Robots can perform a multitude of tasks provided they are continuously tethered to a reliable power supply. Building a self-contained robot, though, typically requires piling on layers of bulky single-purpose systems to handle power storage, actuation and other functions.

Cramming battery packs, actuators, electronics and structural components into a self-contained unit can ultimately make the machine unwieldy and its usefulness short-lived.

To make robots more efficient, researchers at Cornell University have created a robotic lionfish with a synthetic vascular system that performs multiple functions simultaneously. Filled with a synthetic “blood,” the system provides not only hydraulic actuation but also structure to the soft robot’s pliable fins and an energy supply to sustain it for long-duration tasks.

The robotic lionfish is the design work of James Pikul, former postdoctoral researcher and current assistant professor at the University of Pennsylvania, who co-authored a paper on the system with Shepherd and lead author and doctoral student Cameron Aubin.

Like the animal it’s based on, the lionfish robot undulates its fins to propel it through the water. Two hydraulic pumps – one for the tail fin and another for the pectoral and pelvic fins – circulate the fluid in and out of bellows-like structure on either side of the silicon fins. Reversing the flow repeatedly causes one bellows to expand while the other contracts and the fin to undulate slowly.

During this pumping action, the hydraulic fluid also acts as an electrolyte as it flows through the fluidic channels of the robot’s flexible redux flow batteries, contained in the tail fin and the lionfish’s characteristic dorsal spines. As the synthetic blood circulates, ions in the zinc-iodide fluid pass between the cell’s carbon felt anode and cathode through a cation exchange membrane. The electricity generated provides power to the robot’s pumps and electronics.

Eventually the electrolytic fluid has to be replaced and, while the lionfish robot is currently very slow, the researchers say they’ve achieved energy density equal to about half that of a Tesla Model S lithium-ion battery. According to their estimates, that’s enough to keep their initial design swimming upstream for more than 36 hours.

By designing power sources that give robots the ability to function for longer stretches of time, Shepherd thinks autonomous robots could soon be roaming Earth’s oceans to perform environmental tasks like sampling coral reefs. These devices could also be sent to extraterrestrial worlds for underwater reconnaissance missions, he says.

The Cornell research team’s paper (Electrolytic vascular systems for energy-dense robots) appeared in the most recent issue of Nature.
www.cornell.edu