Canada has been able to do a lot of really great stuff and make a big mark in space for a very small amount of money. More federal support only opens up more opportunities for space engineers.

OTTAWA — Canada’s space research community is optimistic they will receive a boost in the federal budget set to land Tuesday. 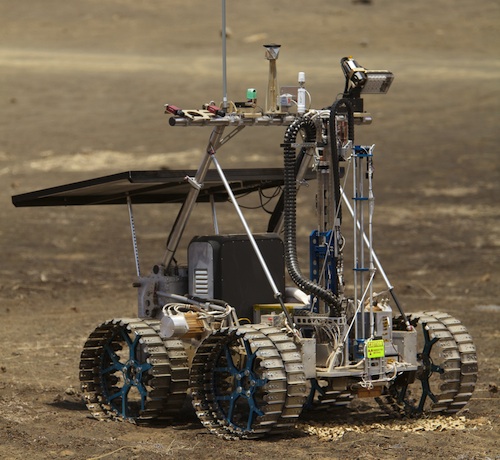 Artemis, Jr., designed by the Neptec Rover Team, is one of a half dozen robotic lunar and Mars rover prototypes developed to position Canada as a player in future space exploration missions.

Liberal Finance Minister Bill Morneau has already signalled that a “key element” to Tuesday’s budget will be major investments to basic scientific research across the country and Canada’s astronomers and space engineers would like to see a slice of that money.

Gordon Osinski, the director of Canada’s Centre for Planetary Science and Exploration and a member of the federal government’s space advisory board, hopes the space community will be included in Morneau’s scientific funding promise.

“My glass is half-full until Tuesday and I’m hopeful that we’ll see some good announcements by the government,” said Osinski. “We do need to see a reinvestment in the Canadian space program.”

Osinski said there’s good reason to be confident. Since August, the Canadian Space Agency has awarded over $7.5 million in new contracts to private aerospace and technology firms on a range of projects including funding for space rover technology and satellite imagery. The agency also put out a call Friday for bids worth $700,000 for contractors to come up with conceptual plans for potential future space exploration missions.

On the list of possible targets: the moon, Mars and Europa, Jupiter’s smallest moon.

No spacecraft has yet landed on Europa, although there are several proposed exploration missions, as scientists believe it may have a liquid ocean under its icy surface.

Osinski said that in the last few months, he’s seen more action from the Trudeau government on expanding the space program than he’s seen in years.

“We’ve been without a space strategy for well over a decade,” he said. “This government has been committed to putting forward a space strategy, which is the first major step forward.”

During a visit to an elementary school in Toronto on Friday, Morneau was asked by a student if he would increase funding to the Canadian Space Agency in the budget. Morneau responded that although he couldn’t say what will or won’t be in the document, he sees the value in supporting Canada’s space program.

“Canada’s had a pretty great history in being involved in space research,” Morneau told the students.

“One of the goals we have over the long term is continuing to be part of space research, because there are some important things that we can learn.”

Tanya Harrison, a Canadian planetary scientist and the research director of Arizona State University’s space technology and science initiative, said she hopes the federal government won’t disappoint space researchers and engineers as they have in the past.

“Canada has been able to do a lot of really great stuff and make a big mark in space for a very small amount of money, so I can only imagine what Canada would be able to do if we had more money,” Harrison said.

“Being able to point at more things like going to Mars or Jupiter or wherever our next mission ends up going and saying, ‘hey, Canada did that’, it’s almost like the little guy that could.”

Osinski said he’s also waiting to see if the Liberals will deliver for Canada’s space program as part of their commitment to support science.

“This government has been verbally more supportive of science and space than previous governments, but the proof in the pudding is what will be in the next budget.”