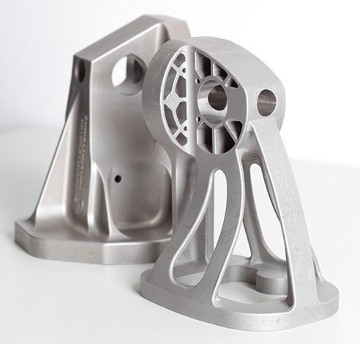 3D printed parts, like this prototype of an optimized Airbus A380 bracket made of stainless-steel powder (right) as a replacement for the standard cast steel bracket (left), could save airplanes significant weight and therefore fuel costs, argues Northwestern University case study.
(Photo credit: Airbus Group Innovations)

A Northwestern University team has confirmed a new way to help the airline industry save dollars and the environment by manufacturing aircrafts’ metal parts with 3D printing. Led by Eric Masanet, the team used aircraft industry data to complete a case study the found 3D printing lighter and higher performance parts could significantly reduce both manufacturing waste and the weight of the airplane, thus saving fuel and money and decreasing carbon emissions.

“The airline industry is an early adopter of 3D printing,” said Masanet, the Morris E. Fine Junior Professor in Materials and Manufacturing at Northwestern’s McCormick School of Engineering. “The main driver is that aircrafts require specialized lightweight metal alloys that can be very costly to process.”

According to Masanet, conventional manufacturing methods tend to be inefficient and wasteful. To produce a 1-kilogram bracket for an airplane, for example, it may require 10 kilograms of raw material input into the manufacturing process. And, from an engineering design perspective, that final bracket may still contain much more metal than is required for the job. 3D printing, on the other hand, requires far less raw material inputs and can further produce parts that minimize weight through better design.
“We have suboptimal designs because we’re limited by conventional manufacturing,” Masanet said. “When you can make something in layer-by-layer fashion, those constraints diminish.”

Masanet does not anticipate a change to the crucial parts of the aircraft, such as the wings and engine, any time soon. But he does see real potential in the replacement of less flight-critical parts, such as brackets, hinges, seat buckles, and furnishings. According to the case study, 3D printing a bracket, for example, reduced its weight from 1.09 kilograms to 0.38 kilograms. This might not seem like much, but it adds up.

If the 3D components evaluated in the case study are used to their full potential, Masanet and his team estimate that airplane fuel consumption could be reduced by as much as 6.4 percent. In addition, their life-cycle analysis found that manufacturing 3D printed components uses as little as one-third to one-half of the energy currently used in conventional methods. Manufacturers would also potentially save thousands of tons of aluminum, titanium and nickel that are otherwise scrapped every year.

But Masanet said there is one caveat. Scientists need to improve 3D printing. Limitations in the process, such as issues with surface quality, residual stresses, repeatability and throughput are current barriers to full-scale adoption.

“If we can accelerate the necessary process improvements, then we can start reaping these savings sooner,” he said. “Maybe then we can start seeing savings 10 years earlier than if we just let the technology progress at its regular rate.”
www.mccormick.northwestern.edu