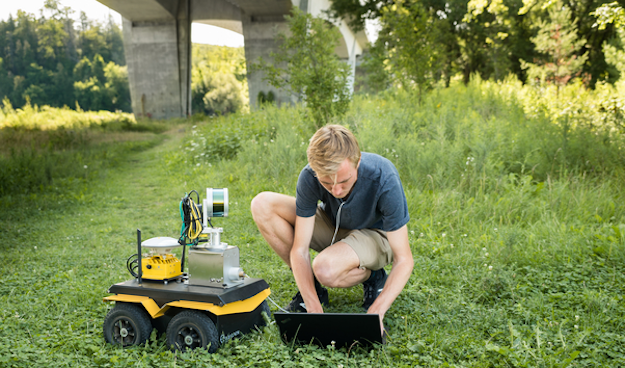 Researchers at the University of Waterloo have developed a system – that combines autonomous robots, cameras and lidar – to perform bridge inspections by systematically collecting data for defect detection and analysis. Required every few years by regulatory authorities to ensure safety, bridge inspections are typically performed visually by inspectors.

According to Waterloo professor, Sriram Narasimhan, a Canada Research Chair in Smart Infrastructure, the traditional method is often imprecise, due to the subjectivity and educated guesswork of the human inspectors. By contrast, he says, Waterloo’s automated system has the ability to precisely measure the size of defects and reveal invisible, sub-surface problems with infrared cameras.

“We can do more than humans now do – and do it much better in every way,” said Sriram Narasimhan, an engineering professor at Waterloo. “It is very inexpensive because you don’t need as many inspectors relying on specialized equipment such as lifts and you get much higher quality information.”

The robotic system is designed so that the results from one inspection can be overlaid on previous inspection results on a detailed map displaying dozens of key vulnerable areas of the subject bridge.

“The benefit is that we can track and quantify defects as they evolve over time,” said Narasimhan, director of the Structural Dynamics Identification and Control Laboratory. “That is not practically possible with humans alone, but it is with the assistance of robots.”

A wheeled ground vehicle used in the research was programmed with an inspection plan detailing instructions on its location and areas of the bridge to focus on. The same software could also be used for inspections with water-going vehicles and airborne drones, or to inspect other infrastructure such as nuclear power plants and buildings.

Eventually, the research team hope to automate analysis of the data collected by robots to much more accurately assess the structural integrity of infrastructure and forecast the need for repairs or replacement.