It may seem obvious, but why a curling stone follows a curved path in the direction of its spin as it travels down the ice is a mystery that has stumped players and scientists alike for as long as the sport has been around. Unlike a baseball pitcher’s curve ball or a golfer’s slice, the stone’s rotation is much too slow for its aerodynamics to have any effect.

The curl’s direction is also counter-intuitive. A curling stone spun clock-wise, for instance, will curve to the right (or left if spun counter-clockwise) while other rotating objects sliding over a slick surface tend to curve in the opposite direction of the spin.

Previous attempts to explain the odd behavior attributed the curve to a difference in friction between the leading and trailing edges of the stone’s underbelly or running band; however, this didn’t explain why stones with a rough running band curl more than smooth stones or why the vigorous action of the sweepers’ brooms tends to lessen the effect.

Recently, tribology researchers from Uppsala University in Sweden, who usually study friction and wear, discovered that the mechanism at work is akin to a car tire following the grooves of a trolley car rail. According to the Swedish engineers’ article, published recently in the scientific journal Wear, the curved path is due to the microscopic roughness of the stone producing microscopic scratches in the ice sheet. 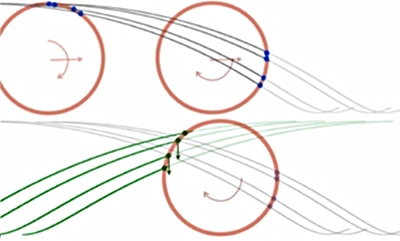 As the rough running band on the leading hemisphere of a stone rotates clockwise, for example, it repeatedly etches the ice in an arc to the right. When the rough protrusions on the stone’s trailing half slide over the same area, they cross those scratches from the stone’s front at a slight angle and have a tendency to follow them. According to the researchers, the sum of these microscopic pushes, or track steering forces, results in the stone moving sideways.

While working on their model, the Uppsala researchers experimented with pre-scratching of the ice in various ways, and observed that non-rotating stones could also be guided. Conversely, the scratches did not affect stones with a very smooth, polished sliding surface.
www.uu.se/en