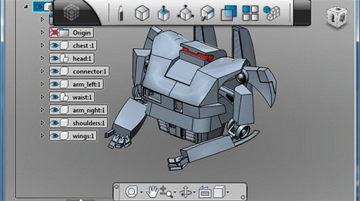 On the modeling side, Meshmixer allows for drag and drop of solid objects; a new primitives category; and a Separate Shells tool to separate combined geometry into distinct objects. The latest version also supports PLY binary, a 3D polygon format common with 3D scanners.

Autodesk’s free consumer-grade 123D Design application also received a bit of a make-over with a new UI that makes it look similar to other 123D apps in addition to providing access to models created in other 123D applications through MyProjects. Based on Inventor, the CAD-lite solid modeler includes new modeling tools such as Combine, Subtract and Intersect operations between meshes and solids.

Also on the modeling side, the application features new snapping options, as well as an option for combining objects on STL export to support printers that read first body only. 123D Design also supports opening, inserting, and saving meshes in STL and OBJ formats and import of SVG files to use as sketches or as simple extrusions.
www.123dapp.com/design
www.123dapp.com/meshmixer