CSA employs AM to produce flight-ready parts for the ISS 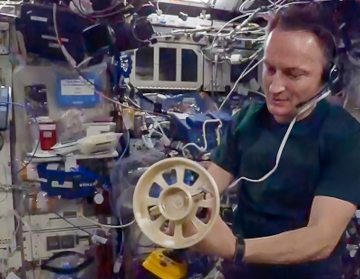 Montreal-based 3D printer manufacturer, AON3D, announced the the Canadian Space Agency used its AON M2+ machine to create a flight-ready component for the ISS. Specifically, the CSA needed a centrifuge part to analyze astronaut blood samples to create new diagnostic information about the short- and long-term health considerations of humans in space.

According to AON3D, the space agency found that traditional manufacturing methods, such as CNC and injection molding, increased prototyping costs and delayed the development of end-use parts. In addition, the CSA needed to factor in materials selection to comply with NASA’s standards for outgassing.

Additive manufacturing allowed for iterative design through rapid in-house prototyping where implementing minor modifications to each design was streamlined. Compared to traditional manufacturing, which could take several weeks and multiple production stages, 3D printing on the AON M2 took 16 hours to produce the final part, the company says.

To build the part, the company used ULTEM 9085, a high-performance thermoplastic. According to NASA’s standards for outgassing, ULTEM meets the safety considerations due to low Total Mass Loss (TML) in vacuum, flame retardant properties, and non-toxicity. The printed centrifuge part was sent for mechanical testing at CSA prior to safety review and launch by NASA.

According to AON3D, the CSA aims to further explore the benefits of additive manufacturing by developing in-house expertise. The success of the centrifuge part has instigated several projects that require 3D printing to optimize design and manufacturing workflows.

The agency has also been considering other high temperature plastics such as PEEK, a material capable of withstanding the extreme heating and cooling cycles in space. This will be used to develop the terrestrial prototype of a lunar rover as part of the upcoming PEEKbot project. The PEEKbot project is a university-led project funded by NSERC-Prima Québec-CREPEC aiming at developing a rover structure able to withstand the lunar night.
www.aon3d.com