In March 2021, for the first time in Onshape’s nine-year history, users of PTC’s browser-based CAD software were treated to a conference – online, ’natch. User events from some CAD vendors are little more than “Aren’t we the greatest!” cheer fests. In contrast, speakers from PTC’s CEO on down were surprisingly frank when speaking about Onshape: What still needs to be done, and even, in some cases, drawbacks to the software. Users had questions answered in chat-rooms during the one-day online event.

As Onshape is now owned by PTC, CEO James Heppelmann was first to speak. In his opinion, all CAD in the future will be on the cloud, which he calls “SaaS” (software as a service). Perhaps after seeing the decade-long failure of competitor Solidworks, as well as Inventor, to cross that Rubicon, he figured converting his company’s line of desktop software to run in the cloud could also take too long and cost too much.

During his presentation, he recounted the days when he watched with interest Onshape’s work at making cloud-based MCAD from scratch and asked his staff for progress reports. In 2019, they told Heppelmann they thought Onshape had succeeded. During that time, Onshape was looking for a buyer to pay off its $169-million debt to venture capitalists; PTC was really the only CAD vendor with the money and interest to buy it.

Bending Towards Atlas
After PTC acquired Onshape, it became a company-wide cloud platform. Existing PTC cloud-based programs, such as Vuforia augmented-reality and Arena PLM, are already being ported over.

In this context, “porting” means changing the way the programs store data to match Onshape’s method. Onshape uses a MongoDB database to store 3D models as data only (no file format). The data is then encrypted and continuously backed-up on Amazon servers running separately from other servers handling geometry calculations and user interactions.

More significantly, Onshape has also become the cloud platform (code named “Atlas”) for PTC’s desktop software, such as Creo MCAD and Windchill PLM, albeit slowly. Heppelmann has acknowledged elsewhere that porting that software to the cloud could take five to ten years to complete, and end up costing customers twice as much in annual fees. He is, however, adamant that cloud-based Creo will have all of desktop Creo’s functions so that customers can use either.

Most surprising to me was the seeming non-role desktop analysis software will play in PTC’s new Atlas era. Last year, the company announced it had adopted Discovery Live real-time FEA (finite element analysis) software from ANSYS. Yet, in a Q&A during the March conference, Onshape staff said they would not be using it: “No, not ANSYS Live. We have something that is very efficient and accurate and will scale well in the cloud.” So, not all desktop software will migrate to Onshape’s cloud.

Arch Nemesis Solidworks
When Onshape launched nine years ago, staff said they were targeting Solidworks users. This sort of makes sense, as Solidworks is the most popular mid-range MCAD program out there and most of Onshape’s executives came from Solidworks. Beat Solidworks and you’ve won the market.

It didn’t happen. PTC states that most Onshape customers come from other CAD packages; the Onshape user base of late might be about 13,000 or higher – compared to 1.5 million commercial customers for Solidworks.

Part of the reason behind that low number could be how tough it is to move a Solidworks assembly to Onshape. Components import as individual objects. In some cases, assemblies end up exploded and centered on the origin.

As a result, PTC recommends that users start new models in Onshape and then import parts from Solidworks only as needed. Or else, they advise, pay Cassini US$10,000 to bulk-migrate a thousand files at a time.

In the better news department, PTC says Onshape now has a million users in the (mostly) free education market, versus Solidworks’ five million. This is an easier market to capture, as these users tend to work with simple models made from scratch or provided in native format. Also, students’ livelihoods do not depend on interoperability.

What’s Next for Onshape
When Belmont Technologies (the original name for Onshape) began writing a next-gen MCAD program from scratch, they determined it had to run on the cloud, and so the priority was figuring out how to store, access, and share CAD data in real-time. “Let’s make sure we put in place the things no one has done before, and then we build out the CAD functionality,” explained Ilya Baran, Onshape VP of architecture.

Users, however, have the opposite priority: CAD functionality is primary; they don’t usually care how or where data is stored. Since CAD functions have taken a back seat during its development, Onshape software could be considered less mature than competitors, even after nine years. Don’t get me wrong: Onshape arrived at a beautiful data solution that’s now mimicked in the engineering software industry. 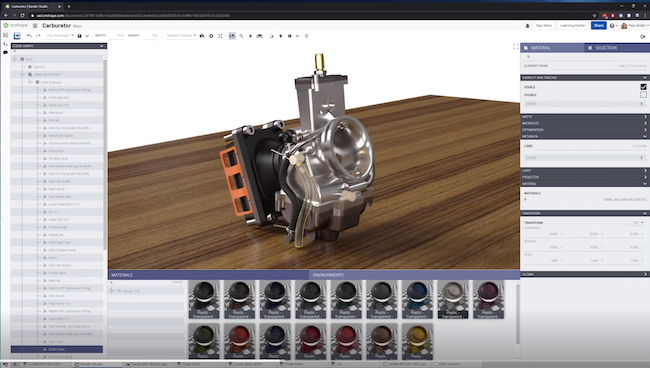 At its 2021 user conference, PTC announced and demonstrated a near real-time rendering module running inside Onshape.
(Photo credit: PTC)

That said, PTC did announce during the conference that Onshape will be gaining two must-haves in MCAD: electrical CAD design and near-realtime rendering. Both were acquired, and both still need to be integrated into Onshape. In addition, PTC is providing Onshape with its Frustum generative design and Arena PLM.

PTC apparently isn’t providing simulation to Onshape; staff showed us instead an early version of their own. We saw them placing loads on assemblies, and then running the simulation in a separate tab. When the results returned to the model, staff exploded the stress plot and drove the parts by displacement. Rendering and simulation definitely benefit from as many CPU or GPU cores the cloud can provide.

PTC is cycling fast to get Onshape up to par with an updated release every three weeks. During the conference, PTC showed off lots of tweaks, such as editing cross-hatches in section views. Once computed properties are added to Feature Studio and to bills of materials, users will be able to calculate things like area, mass and even the shipping size. 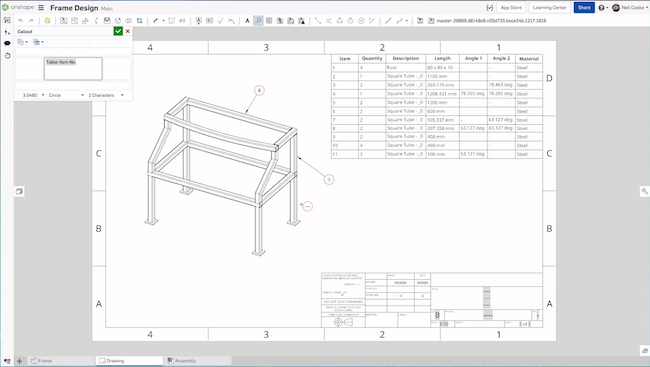 Among its new capabilities, Onshape’s Frame function will generate custom cut lists and allow them to be edited in drawings.
(Photo credit: PTC)

In the future, the Onshape’s Frames function will allow for the use of custom profiles on any edge, and combine geometry with different profiles. Users will also be able to generate custom cut lists and allow them to be edited in drawings.

Some new functions will, however, be available only to holders of more expensive licenses, such as the computed properties and a new Auditor function that checks whether change orders were implemented. This last technology came from PTC’s Windchill PLM software.

Onshape’s first user group conference proved to be a refreshing change. We got to hear about real-world problems and solutions. The conference showed us how far Onshape still needs to go to catch up with more mature MCAD programs, despite an update schedule that runs about 6x faster than its MCAD competitors. Nevertheless, Onshape remains the premier and only MCAD system that’s fully cloud-ified. |DE
www.onshape.com

Ralph Grabowski writes on the business of CAD on his WorldCAD Access blog and weekly upFront.eZine newsletter. He has authored numerous articles and books on CAD, Visio and other design software.