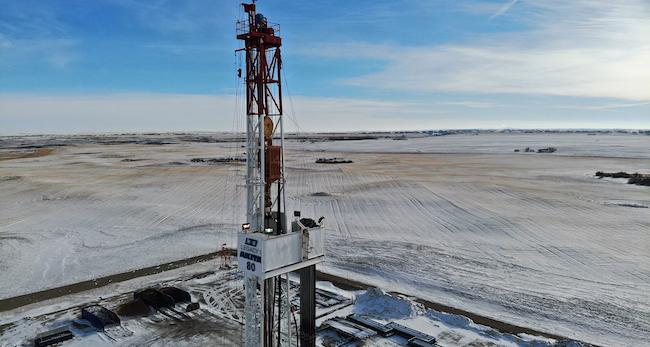 To reduce downtime due to the high winds, this AKITA Drilling pad rig – at K+S Potash Canada’s mine in Saskatchewan – was fitted with an igus e-chain to protect the system’s long service loop cabling. (Photo credit: igus)

The hurricane force blizzard that bore down on Regina in January 2021 wasn’t a garden variety Canadian snow storm. Winds reached 126 kilometer per hour, a record for that month. News organizations compared it to a 2007 blizzard that killed two people, shut down airports, brought motor vehicle traffic to a standstill and shut down public services.

Workers at AKITA Drilling had seen this movie before, and the reviews weren’t good. Among its 20 Canadian rigs, the Calgary-based drilling company operates a 500,000-pound-capacity pad rig at K+S Potash Canada’s potash mine near Bethune, Saskatchewan, approximately an hour from Regina.

Just two months earlier, a major storm roared through the area which broke all-time November snow records in some areas of Saskatchewan with more than 47 centimeters in just 48 hours. Similar conditions, and even those less forceful, had forced AKITA to shut down its drilling operations at the potash mine.

This time, however, a retrofit of its drilling rig just one day prior to the January blizzard proved to be a production savior. Workers encased the top drive service loop with an igus energy chain to protect the rig’s electric and hydraulic lines.

“Even in those extreme conditions, the loop functions very well,” said Darren Hrynkiw, a senior manager for K+S Potash Canada. “I am always pleased when an engineered solution can be found to eliminate a safety hazard as this is far more effective than procedural safeguards. We expect little to no maintenance given its design and there are no productivity impacts with the installation of this protective system.”

Service loops explained
Located on the first greenfield potash in Saskatchewan in more than 40 years, AKITA’s rig in Bethune is composed of a one-piece 16-foot tall substructure with a 136-foot tall mast. At the heart of the system lies a large electrical motor in the rig’s top drive, which travels up and down the mast as the rig drills. The top drive’s electric and hydraulic systems are supplied by a long dangling umbilical cord, or service loop. In addition to the main motor, electrical lines in the service loop also provide auxiliary power for lighting, lube oil heaters and cooling fans, as well as control, data and instrumentation functions.

To protect these critical components, many service loops are encased in steel jackets, which can be susceptible to corrosion. In fact, corrosion is one of the most significant problems for rig reliability, especially in drilling for oil and gas in environments located near or in waterways. As a consequence, steel service loops require continual maintenance.

Repair work on service loops is also dangerous in oil and gas exploration. In a 1988 incident in the North Sea, near Scotland, 167 workers were killed at the Piper Alpha Oil platform. With all sorts of moving parts, and sometimes extracting flammable products, workers face a potentially deadly work environment. Similarly, there were safety concerns at the AKITA rig stemming from the cables on its service loop.

“There was more than one occasion where the service loop became snagged on the top drive, resulting in a dangerous overhead safety incident with high voltage cabling,” Hrynkiw said. “Multiple engineered safety solutions were explored, but in most cases the solution presented other maintenance or sometimes even new safety concerns.”

The bigger issue, however, was that the cables became snagged on the rig during operations in high winds. That caused rips and pulls on the cables, which are also costly to replace.

“Sometimes the wind gusts and grabs the service loop and sends it into mast beams,” said Justin Amyotte, a field superintendent with AKITA. “Hopefully, the driller sees it and stops and fixes the snag. If he does not see it, the cords get damaged. That results in even longer downtime.”

E-Loop solution
AKITA Drilling sought a solution to eliminate downtime caused by high winds. “We tried multiple ways to combat the wind messing the service loop,” Amyotte said. “We even went as far to set up the rig in the direction of the predominant winds. We even stationed a worker on the floor watching the service loop at all times during high winds.”

With a bend radius of 500 millimeters, igus’ polymer e-chain encases and protects the rig’s service loop while a high tensile Dyneema rope bears the weight of the loop’s electrical and hydraulic lines. (Photo credit: igus)

The igus e-loop has a bend radius of 500 millimeters, and combines the advantages of a polymer energy chain with a Dyneema rope that possesses high tensile strength. The tensile forces are absorbed by the rope and passed through the mounting brackets into the support structure. The design relieves cables of any strain, and ensures a defined bend radius of the cables. The modular e-loop also withstands vibrations and shocks.

The e-loop is mounted in the middle of the mast, which is a load-bearing structure used to support and position the drill string. The e-loop traverses the 136-foot mast by going 70 feet up and 70 feet down from the center point.

“Less down time results in more productivity, and less damage to the rig saves money,” Amyotte said. “There is also an important safety component. There is 600VAC running through those power cords and up to 600 amps before the breaker trips.”

AKITA and igus completed the retrofit in eight hours. AKITA used the existing cables on the rig, and installed them into the igus e-loop. The option to use existing hose supports and mounting brackets reduced retrofit time and costs. Cables are free of strain, and the self-lubricating modular e-loop ensures a defined bend radius of the cables and withstands vibrations and shocks. The e-loop can be opened and closed for easy maintenance, and includes cable-friendly, two-chamber interior separation.

“Sourcing igus was a bit of a challenge because they had never been used in Western Canada until now,’’ Hrynkiw said. “igus was very responsive in working with us to find a way to make a delivery happen for the first time to Western Canada. When the e-loop arrived, we found the install to be relatively quick and easy and the overall design is intrinsically safe and rated for overhead use.”

Saskatchewan is home to approximately 50 percent of the world’s known potash reserves, and it is critical to the Canadian economy. Exports of potash from Saskatchewan amounted to more than $5 billion in 2017, and generated payments of more than $308 million to the province’s economy in 2017-18.

As a critical component to the Canadian economy, and the world’s food supply, it is important that production stays on pace. The new e-loop will help support steady potash production, even in the most severe weather conditions.

“We worked out a great solution,” Amyotte said. “This has been a challenge for us for a while, so it’s nice to have something we can depend on.”
www.akita-drilling.com
www.igus.ca

Scott Parker is the igus product manager for energy chain systems in Canada.