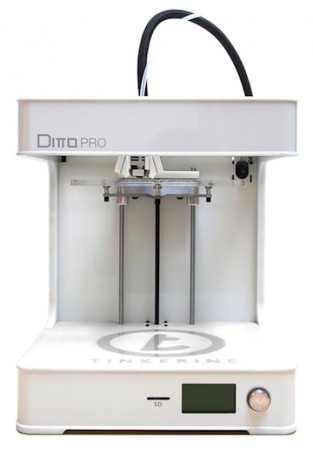 Who knew the 80/20 rule applies as much to 3D printer technology as it does to diet and exercise? Because that’s the precise ratio of aesthetic to performance enhancements Tinkerine Studios in Vancouver is offering in its latest 3D printer, the DittoPro – arguably giving a break from the relentless search for speed and power in return for an elegant, lower cost box in which to put it.

“[Our] previous models are [made from] laser cut wood and look like they’d [be suited for] a garage or a workshop,” says Tinkerine VP, Todd Blatt. “This machine, you’d be proud to have it on your desk.”

Blatt insists, however, that DittoPro is not just another pretty face. In development for just over a year, the new printer’s machined aluminum construction, over a 350 x 370 x 480mm footprint, also uses 43 percent less desktop than its competitors. The unit will have broad appeal says Tinkerine CEO Eugene Suyu, from prototype engineers and teachers to small business professionals.

“It really allows entrepreneurs to explore their ideas into real life and have access to something they didn’t have before: toys for the kids or to explore the robotics of industry that’s exploding in education; all those applications are now opening up,” he says.

In fact, Tinkerine came into being as a result of Suyu’s own education. A graduate of Simon Fraser University in 2012, Suyu says he built his own 3D printing skills by tinkering with the “rods and bolts” of an open source RepRap printer. Suyu quickly decided that this technology wasn’t up to snuff. As prosumer models had yet to be introduced, he set out to rectify that by designing his own 3D printer.

“We found working on an open source platform was more tuning, tweaking, hacking and making as opposed to utilizing the tools of the machine for creating the actual product,” he says. “That was what I wanted to achieve.”

“As a designer, I would find the height of those machines crippling,” says Blatt. “Using DittoPro, you get more detail when you’re printing on the Z axis. You’re able to print taller things because the machine is taller.”

Suyu agrees. “We just wanted to make one that you could utilize around what you want to build. So you’re not limited. You can open yourself up to long objects as well as small objects.”

The aluminum construction and stable glass print bed allows precision printing of very small parts as well. In addition, DittoPro relies on an open spool filament system to avoid lock-in to a cartridge system, says Blatt. It’s a complaint aimed at CubePro and other cartridge-based 3D printer manufacturers. Blatt says that, far from being grateful that they can send back their empty cartridges in return for a discount on new cartridges, some customers view it as a money grab.

“They’re offering a discount on a very expensive product, so it’s deceptive,” he says. “You get much, much less plastic, like one third of the amount, and they charge more for the cartridge.” By contrast, he says, DittoPro’s filament system accommodates other manufacturers’ filament. “Not only do we manufacture high quality filament at an affordable cost, we’re not requiring you to use it.”

Beyond the printer’s larger build space, Tinkerine’s other objective is one-click operation and ease-of-use functionality with all settings available at the software level and automatic file generation. Available on Windows or Mac, Blatt says the printer’s software guides users through the printing process.

“You just push the import button,” he says, “[The software] brings in your model and puts it on the platform for you. There’s nothing imposing about it; the settings are preset and you’re ready to go.”

Suyu says Tinkerine prides itself on building high performance units at an affordable price. The price tag for its DittoPro seems to bear this out. At a retail price of US$1,899, it’s lower than MakerBot’s previous Replicator 2X (US$2,499), though that model’s build volume is comparable (246 x 152 x 155mm). By contrast, 3D Systems offers a single jet CubePro with comparable speed but a lower resolution of 100 microns and higher price tag of US$2,799.