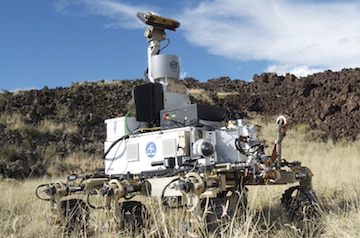 In the international space exploration community, Canada is known for doing one thing exceptionally well – space robotics. While the Canadian space program, and the agency that shapes it, has been historically small in comparison to the likes of NASA or the European Space Agency (ESA), high profile projects like Canadarm and Dextre helped cement Canada’s commercial space companies as not only dependable partners but masters of this niche but critical segment.

“From a scientific point of view, Mars is interesting for the search for life and the next destination for human exploration,” he says. “From a Canadian point of view, we are also targeting the moon. When we established [the CSA] exploration plan in 2007, developing rovers was seen as the next step for Canada to contribute.”

Toward that end, the federal government allocated $110 million over three years as part of the 2009 budget’s Economic Action Plan. Of that, $60 million was dedicated to the Exploration Mobility project, a CSA initiative to develop prototypes for lunar exploration rovers and Mars science rovers.

Now, three years later, that investment has begun to pay off. In October, the CSA rolled out a series prototype rovers developed by leading Canadian commercial space companies in line with the requirements of anticipated U.S. or European led lunar and Mars missions.

Before astronauts can set foot on Mars, engineers and scientists will first have to return to the moon to learn how explorers could live and work there for extended periods, says Brad Jones, director of mobility and mission systems for Kanata-based spaceflight engineering company Neptec.

The reason is that launching a manned mission directly from Earth would be impractical given the travel distance. Factor in the difficulty of breaking Earth’s gravitational field with enough fuel, oxygen and provisions for a Mars exploration crew to make the round trip and the moon becomes a more advantageous launching point. Of course, an extended stay on the moon would require exploiting resources locally. According to Jones, robotic lunar rovers will play a key role.

“As part of the RESOLVE program, NASA has spent considerable time developing technology that can manipulate and process regolith—that loose layer of soil on the surface of the moon—and pull from it whatever volatiles might be bound into it, whether that be water ice or oxygen and hydrogen molecules bound to other minerals,” he says. Neptec’s early prototype, Juno is the smaller of the pair but is actually composed of a family of similar rovers that share a common U-shaped chassis with skid-steering, four-wheel drive and a walking beam suspension, similar to that on large utility trucks. Roughly a meter square and weighing 300kg, Juno can carry science payloads of 275kg at up to speeds of 13 km/h.

In addition, the rover can be operated remotely but has a limited on-board processor and navigating capability, Jones says, since Juno serves more as basic platform for testing sensors and other components without the need to tie them into more complicated robotic systems.

“In contrast, Artemis, Jr. has a sophisticated processor with the software to go with it,” he says. “It’s remotely controllable, but also has semi-autonomous capabilities. It can navigate from waypoint to waypoint without human intervention by creating terrain maps and avoiding obstacles as it goes.”

While lighter and considerably slower than Juno, Artemis Jr. can operate for longer on its power supply and also integrates a solar panel to power on-board science payloads. It’s two electric motors, one for each side, provide the rover’s four-wheel drive and tank-like skid steering. Artemis, Jr., designed by the Neptec Rover Team, is one of a half dozen robotic lunar and Mars rover prototypes developed to position Canada as a player in future space exploration missions.

“We take the view that simpler is better,” Jones explains. “For instance, it takes a bit more power to skid steer a vehicle than articulated steering, but it also takes fewer motors and simpler electronics. If you can meet all your mission objectives with a less complex vehicle, we would argue that it will be around for longer and better suited to a wider set of mission objectives.”

Like Neptec Design Group’s rovers, MacDonald Dettwiler and Associates’ Lunar Exploration Light Rover (LELR) can act autonomously or be tele-operated but is also designed to act as an astronaut transport vehicle. As such, it’s the fastest (15km/h) and heaviest (900kg) of the Exploration Mobility project rovers and can carry up to a 300kg payload. According to Ryan McCoubrey, a lead rover engineer at MDA, special consideration had to be paid to make LELR human-centric.

“To accommodate a human, we needed to have a low footwell so astronauts could step into it easily,” he says. “Of course, narrow beam sections are not good; you want a deep box for strength. It was a big trade-off between how low we could get that floorboard versus how strong the overall structure had to be to handle the large payload masses and all the terrain variations.”

Like the Curiosity Rover presently on Mars, additional rovers will be needed to investigate the Red Planet, especially if Curiosity finds a surprise or two during its mission. Toward that goal, MDA has developed two rovers, both designed to perform geologic surveys.

Originally earmarked for the ESA ExoMars mission, MDA’s Robot Explorer (REX) is designed to simulate rock and soil sample collection on Mars. To transport its scientific payload, REX has a unique drive system that allows it to clear obstacles up 15cm high.

For example, the left and right front wheels are connected by a walking beam suspension, as are the rear left and right wheels across the back of the vehicle, allowing all of them to stay in contact with the ground under a variety of conditions. In addition, REX incorporates 16 motors total; each of its six wheels have individual drive and steering motors as well as a “walking” motor.

“This allows the front left leg to walk forward followed by the right front leg, then middle legs and finally the back legs before the rover stands itself back up,” he explains. “This moves the rover forward about 20cm but is done in a way that REX doesn’t climb, but steps up a hill. That allows it go up much steeper slopes and over much higher obstacles.” Like REX, MDA’s Mars Exploration Science Rover (MESR) has six wheels and similar suspension but doesn’t have REX’s walking feature. Solar-powered, MESR is twice the weight of REX but can carry 70kg of scientific equipment. Most importantly, though, MESR has been designed as a whole, with its payload and locomotion sub-systems developed in tandem.

“This integration makes it easier on all fronts,” McCoubrey says. “From a mechanical perspective, you can make sure your robotic arm has enough reach because you know where it’s going to be mounted and from an electrical perspective you know you’ll have enough power to deal with the payload.”

While NASA has field tested these Canadian built vehicles, as yet, says the CSA’s Piedboeuf, the Exploration Mobility project rovers are purely terrestrial prototypes, rough sketch test platforms that may someday be chosen for further refinement.

“If we want to go to the moon or Mars, we need to develop the planning and operation capabilities, and then integrate all that together and prove the systems work,” he says. “At the same time, we need to identify potential missions and make sure our technologies are ready. The important part, for now, is to learn everything we can from these rovers.”
www.neptec.com
www.mdacorporation.com