Surgeons who perform minimally invasive surgery (MIS) face a daunting challenge. In traditional surgery, doctors can use their fingers to gauge how much force they are applying when performing a common procedure like tying a suture. During MIS, however, the surgeon operates long, thin surgical tools inserted through small openings in the patient.

As a consequence, it can be difficult to “feel” when too much pressure is applied with the tool. That can lead to negative outcomes. According to a 2016 study by Johns Hopkins University School of Medicine researchers, medical error is the third leading cause of death in U.S. Of that, an estimated 12% is due to improper force.

To address this problem, two University of Toronto engineering students, Justin Wee and Robert Brooks, spent two years developing a digital system that can be retrofitted onto existing MIS surgical tools to restore that lost “sense of touch.”

Called ForceFilm, the system employs between two to four strain gauges to capture axial force and torsion. The gauges are embedded in a thin, flexible circuit board, or film, that wraps around the instrument near its end effector and extends up to a cylindrical electronics module on the surgical tool’s handle. A Bluetooth transceiver in the module transmits raw strain gauge data to a surgical monitor that warns surgeons if they are exerting too much force.

During ForceFilms’ development phase, prototypes were used in an educational study with 19 urologists at the Toronto’s Hospital for Sick Children. The team’s second prototype assured that the surgical instrument could be sterilized without ruining the electronics.

In recognition of their efforts, The James Dyson Foundation awarded Brooks and Wee the Canadian James Dyson Award for their ForceFilm project. The annual international product design competition tasks students from around the world to design something that solves a pressing problem. For winning the Canadian award, the pair received $3,400 toward ForceFilm’s development. 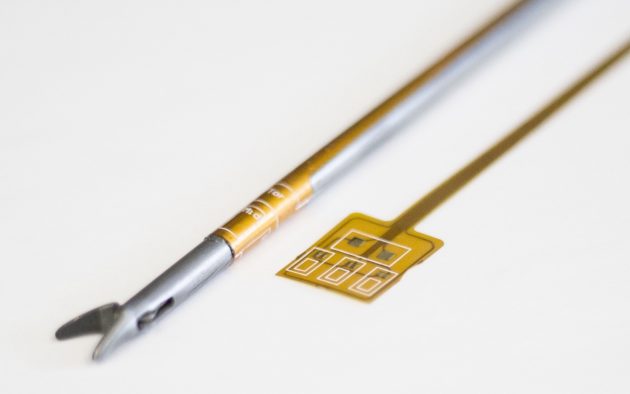 ForceFilm employs strain gauges embedded in a thin flexible circuit board that wraps around MIS surgical tools to monitor forces applied during surgery in real time.

“Unlike most medical sensors, ForceFilm is uniquely economical and environmentally friendly because it can be steam sterilized and reused,” said ForceFilm co-founder, Robert Brooks. “We will be using the prize money to make ForceFilm last even longer. This will allow us to try different formulations and constructions of film and build test apparatuses to repetitively test them for abrasion and steam resistance, with the goal of having ForceFilm last a full year in surgical use.”

The Canadian James Dyson Award is the latest prize the UofT pair have received. Others include the $10,000 UofT Hatchery – Lacavera Prize and the National Technology and Business Conference – Veteran Pitch Competition. Their project, along with five other Canadian runner-ups, will enter the International Dyson Awards, where they will go up against other national winners for the ultimate $50,000 prize.

Whatever the outcome of the international competition, the duo have already begun commercialisation of their invention. According to newly formed start-up, SensOR Medical Labs, the company will leverage ForceFilm to help train surgical residents, increase MIS safety and enable new surgical procedures that are not currently possible.