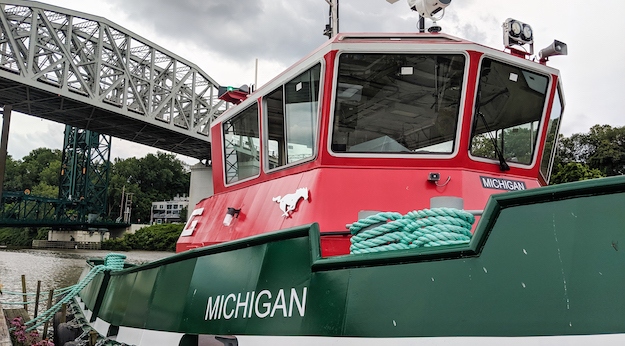 For almost a half a century St. Catharines-based Canal Marine & Industrial has provided electrical design, engineering and services around the clock to the merchant marine, naval and coastguard fleets in Canada and the rest of the world. In recent years, Canal has become a leader in the design and supply of marine hybrid power and propulsion systems. These systems utilize alternative methods for supporting propulsion and the vessel’s electrical power plant, so that fuel consumption and emissions are reduced.

The Marine Integration Group, comprised of Canal Marine with partners Logan Clutch of Cleveland, Ohio and The Breakwater Group of Prince Edward Island, provides Great Lakes Towing with state-of-the-art hybrid power and propulsion systems for three new-build tugboats to be operated in the Great Lakes area. These systems allow the vessels to run with their large main engines shut down for extended periods and also allow their diesel generators to run less frequently and more efficiently.

Running into Turbulence
Canal faced some challenges developing the hybrid system, which is centered on a common-DC bus arrangement connecting a number of drives, front ends and grid converters. For one, the air-cooled power converters had to be securely mounted within an environment subject to significant movement and vibration – as anyone who has experienced tugboat operations will testify. The system’s drives, while very efficient, generate some heat which had to be controlled to preserve their rating.

As well as the drives, automation equipment and other electronics had to be mounted in a manner that keeps them accessible, while eliminating the possibility of any electromagnetic interference from drives or motors. Lastly, there are some significant restrictions on the sizing of the entire system, as space is always limited within a tugboat.

Tow by Tow
To overcome these challenges and provide premium service and high quality products for Great Lakes Towing, Canal turned to Rittal, a company recognized as a proven supplier of enclosures for the marine industry.

“We were pleased to partner with Rittal in developing an integrated solution that provided security, flexibility and reliability, so that Great Lakes Towing can rest assured that their tugboats can run efficiently and in an eco-friendly manner,” says Shawn Balding, Director, Canal Marine & Industrial. “This is the first of three Hybrid Systems for The Great Lakes Towing Company to kick off in 2019, and we hope to continue our partnership that works well for all of us.”

Indeed, Canal personnel have extensive experience working with Rittal products over the past ten years. Canal personnel have installed drives rated above 1MW within Rittal TS8 enclosures in recent years. Rittal’s products are considered, within the marine industry, to be sufficiently robust and flexible for use in a range of applications; from small bulkhead-mounted control boxes to full switchboards, MCCs and drive lineups.

As a result of the partnership with Rittal, Canal Marine & Industrial was able to deliver a flexible system where modular enclosures could be connected, or ‘bayed,’ to create a longer enclosure perfectly matching their needs. 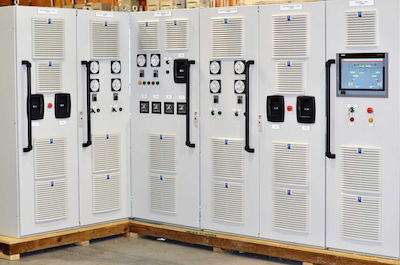 In addition, the system employs a common bus-bar system complete with clamps, connectors, covers and other accessories. Not only does this remove the task of designing a solution in-house, it also provides a rated (documented) system suitable for their steady state currents and braced for their peak fault currents.

Also, the system’s fans, heaters and thermostats allow Canal Marine to ensure the environment within the enclosure is regulated. During periods of down-time, the enclosure is heated to prevent condensation. While in use, fans are used to remove heat produced by drives and other components. The Rittal fans move a significant amount of air, as the ambient temperature in the tugboat is already elevated by the presence of large engines.

Rittal’s modular system allows Canal Marine to individually purchase infrastructure, such as side panels or additional supports, to tailor the enclosure perfectly to their needs. Rittal even provides cable-management accessories that help maximize the internal space, keeping the cabinet line-up as small as possible. Replacement elements – like doors or side panels – can be purchased individually to accommodate rework needed for future upgrades to the hybrid system.

“If state-of-the-art technology in industry can help toward sustainable environmental management and protection, then that is a good thing,” says Rittal President, Tim Rourke. Shawn Balding, Canal Marine’s Director adds, “Our goal is to provide our clients like Great Lakes Towing with solutions that are energy efficient and environmentally friendly, and Rittal complies in every way.”

“In the ‘maritime applications’ segment, Rittal is pleased to offer a range of complete system solutions that are sufficiently robust to reliably withstand stringent demands, including systems for particular environmental requirements, resistance to vibrations and seawater, and products with special approvals, which are important for maritime applications,” says Tim Rourke, President of Rittal Systems Ltd. “We were so pleased to partner with Canal Marine to offer solutions that incorporate the vast product diversity of Rittal’s standard range, flexibly combined with one another for considerable safety and reliability as well as time and cost savings”.
www.rittal.ca

This article contributed by Rittal Canada.