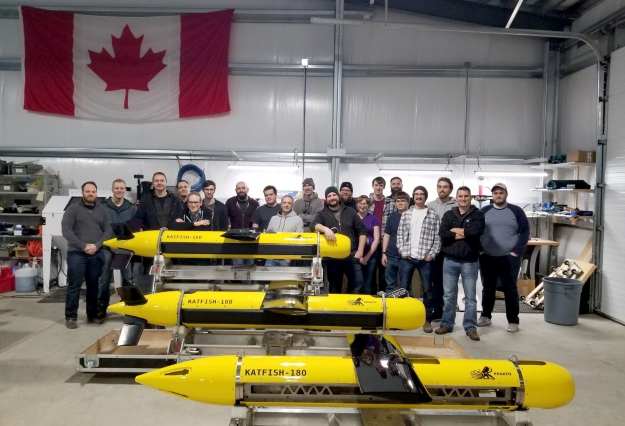 To anyone who casually follows the Canadian technology scene, Newfoundland’s Kraken Robotics, like its namesake, seems to have suddenly burst to the surface, relentlessly moving from conquest to conquest.

In 2019 alone, the St. John’s-based marine technology company has acquired a new business unit, secured nearly $7 million in contracts and been named to the TSX Venture 50, placing first in the annual listing’s technology category. Further, the company says it’s on track to double revenue growth again this year, to approximately $15 million.

In reality, Kraken has been literally and figuratively lurking in the depths, slowly building its strength since 2012 when the firm’s founders spun off from commercial fishing technology company, Marport Deep Sea Technologies, to better focus outside the fishing sector. The team, including Marport’s then-CEO Karl Kenny, bought the intellectual property rights to the Synthetic Aperture Sonar (SAS) and related marine technologies they’d developed while at Marport. The new company immediately set about leveraging its high-resolution sonar toward military, oil and gas, exploration and related markets.

“Synthetic aperture sonar, like our AquaPix sonar, is a next-generation system,” explains David Shea, Kraken’s VP of engineering. “It’s designed for very highend imaging of targets on the seabed. Presently, most applications for our sonar are in mine countermeasure-hunting. The U.S. Navy has determined that to acoustically classify a target as a mine accurately, you need a resolution of at least 5cm.”

According to Kraken, its SAS systems can capture detail down to 3cm by 3cm out to approximately 300 meters. When paired, one array on either side of a torpedo-shaped towfish or an autonomous underwater vehicle (UAV), the range extends out 600 meters. Shea says that kind of performance is an order of magnitude better than most commercially sonar technology available.

“Many of our competitors use real aperture, side-scan sonar systems,” he adds. “One of the challenges with those systems is that their resolution is fairly good close to the array but degrades very rapidly the further the target is away.”

The reason behind that performance discrepancy is related to the effective length of these systems’ sonar arrays, better known as aperture. As with radar dishes, and telescopes, the bigger the better. A longer array allows for a narrower beamwidth, or the expanding cone formed as an acoustical signal travels out. Eventually, that signal reflects off a target and returns to the sonar’s receivers. The bigger the aperture, the tighter the beam, meaning it can travel farther and return higher detailed data.

Traditional side-scan sonar employs a long, thin array, that sends and receives sequential pings as it moves through the water on a set course. The resulting data is then compiled into a single set, similar to making one panoramic image from multiple, overlapping photos. However, each piece of the overall image is limited by the resolution of the fixed-length array.

Synthetic aperture sonar, as its name suggests, isn’t constrained to a fixed physical aperture size. In addition, through sophisticated beamshaping and multi-aspect receivers, a SAS system can scan objects from multiple angles, to form acoustic images that are at a higher resolution than an image captured from a single flat aspect.

“With SAS, we take a smaller array, sliced up into many very small elements, and move it on a path through the water, constantly sending and detecting pings to and from the seabed,” Shea explains. “Our system then combines those multiple pings, using very sophisticated signal processing software, to make the system act like one very long array. To put some numbers behind that, our physical array is one meter long but, in software, we can make it act as if it was 25 meters long.”

While the concept of SAS sonar has existed for more than 40 years, its actual use is relatively recent due to the system’s computationally heavy data processing requirements. Even so, the technology largely remains the domain of tier-one defense contractors. In contrast, Kraken developed its SAS technology, from the beginning, with an eye toward both military and commercial customers. In addition, Kraken’s Interferometric SAS can also conduct detailed bathymetric studies that overlaps this depth data with detailed sonar images.

“Our original AquaPix INSAS product is tuned for mine-hunting in shallow water,” Shea says. “Our newer product, MINSAS, or Mini Interferometric Synthetic Aperture Sonar, is compact and fits in smaller vehicles but is also depth rated up to 6000 meters. The gross majority of commercial work is at less than 3000 meters but we are seeing some countries pushing their exploration into deeper water, especially for seabed mining.”

To assist customers with those projects, Kraken has also engineered related marine technologies to make the complex process of sonar data collection as straight forward as possible. The most notable are the company’s two sonar platforms: The Katfish, an actively controlled towbody, and the Thunderfish autonomous underwater vehicle (AUV). Designed for shallow water, high-speed surveys, the Katfish depends on a surface vehicle for locomotion, but has drone-like capabilities including navigation control, depth maneuvering and obstacle avoidance. Its tether cable supplies power and transmits data on board for processing.

“The Thunderfish is fully autonomous, meaning it’s free swimming with two propellers on the back,” Shea says. “The interesting thing about both systems is that they use the same SAS systems, as well as our navigation solution, processing software and actuators, as well as our underwater laser scanner. So they are both fully integrated survey packages. The difference is that the Thunderfish performs all the data storage and processing on board and uses our pressure tolerate batteries to descend down to 6000 meters.”

Kraken’s pressure-tolerant batteries are one of the company’s latest innovations, produced by its recently acquired subsidiary Kraken Power. Conventional cells employ an oil compensation system that encapsulates lithium ion cells in a pressure vessel. A mechanical system feeds or removes oil as pressures and temperatures change. Kraken’s batteries immerse the cells in a jello-like polymer, eliminating the weight, fragility and leaks associated with oil-based systems.

“Once that silicon-like gel cures, we put a box around it that gives the battery some sturdiness,” Shea explains. “The unit is then shock tolerant and self-healing; repair only requires scooping out the silicon, putting in a new part and repouring the silicon. We can also make the battery any shape as applications require or new battery technologies become available.”

Although Kraken has built its business to date on engineering and developing superior hardware, it has begun offering robotics-as-a-service, as many customers are ultimately after acquiring data rather than hardware.

“The inspection, repair and maintenance market is huge,” Shea explains. “Oil and gas is certainly a big consumer, but the off-shore wind market growing massively. It’s very shallow where the turbines are based, so there’s concern about what’s happening on the seabed.”
www.krakenrobotics.com