Automation is forcing every business to re-invent the way it operates. While automation has been evolving in the restaurant industry, most previous applications have tended to focus on service and ingredient preparation.

One Canadian start-up, however, is changing the game.Toronto-based startup, RoboEatz, has designed the Autonomous Robotic Kitchen (ARK), a solution in which a robot sorts solid and liquid ingredients and then cook multiple hot and cold meals.

The company’s founders, Konstantins Korchomkins and Janis Poruks, started developing their ARK in 2019. Poruks had nearly a decade of technical expertise in running Woki Toki, a fast-food chain in Latvia. Korchomkins ran a company providing engineering services to the aerospace industry.

Perhaps most importantly, RoboEatz has a vision. “It is difficult to find personnel who want to work in catering,” Poruks said. “And the quality of the food prepared is often inconsistent. This is not acceptable in the catering industry.We also wanted to make sure that fresh produce was used as a matter of principle.”

How it works
The heart of the ARK is a “kitchen cell” which features an industrial robot in the middle. Mounted on two of the inner walls are 50 containers for solid ingredients and 30 for liquid ingredients. A third wall includes utensils, cooking pots and mixers.

When the robot cooks, it grips one of the containers and tips the right amount of ingredients by weight into the working device. The unit repeats the step as often as needed, adding each ingredient without physically touching any of them. The gripper handles only the containers. The prepared ingredients are combined, cooked and garnished as necessary.

The cell can prepare up to 70 meals while automatically cleaning itself and refilling the contents of ingredient containers.While the system is automated, Korchomkins said users have full control of the prepared dish. Salads, soups, pasta, vegetarian, and meat dishes can all be prepared in the ARK.

“When it comes to recipes, the restaurateur has free rein,’’ Korchomkins said. “We provide the user interface where he drags and drops recipe elements and preparation data such as cooking time andtemperature.”

The shortage started during the pandemic, but the industry has not fully recovered. It is not uncommon for restaurants to have extended wait times unrelated to space availability. Rather, the delay is due to the lack of personnel.

“We’re not sure where all the workforce went, but a lot of them have disappeared, from managers to chefs to hourlies,’’ Dave Nicholas, a founding member of Alexandria Restaurant Partners, told CNBC.

RoboEatz sees scalability as one of the keys to its future. “If we sell 1,000 or 10,000 robots a year, as we hope to do, we can cover those orders easily with igus production parts,’’ Poruks said.

After the construction of several prototypes, two years of testing, and continuous improvement, the first “robot kitchen” has already been put into operation. More are sure to follow.

“It’s quite clear that the system must be profitable for the restaurateur,’’ Poruks said. “We expect a payback period of two to three years.”

Korchomkins said interest in the catering industry is already high. “We are convinced that this is the future of gastronomy,’’ he said. “As a contributor of many parts, igus is a part of it.” 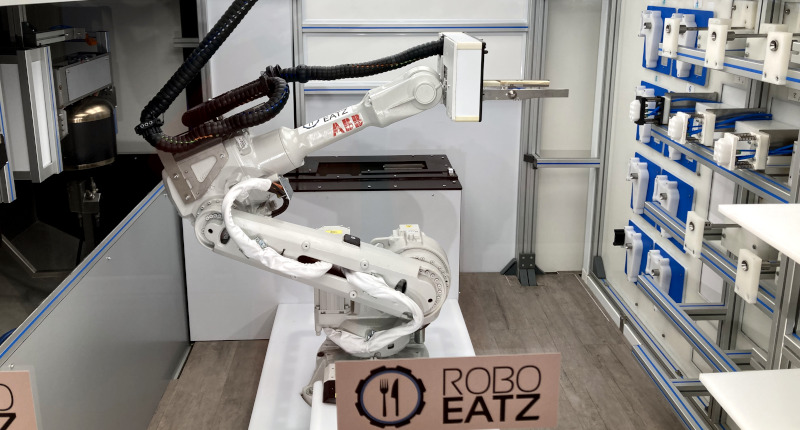 The heart of the ARK system is a “kitchen cell,” which features an industrial robot at its center.
(Photo credit: igus)

Bringing in low-cost automation
Poruks produced individual parts for the first prototype with 3D printing materials. For series production, he selected a component from a modular construction kit. igus, the Germany-based manufacturer of motion plastics, provided a range of products from its low-cost automation department to assist with the project.

An RBR energy supply system with a rotation angle of 360° in the robot’s first axis delivers energy and signals to the robot. igubal fixed flange bearings and rod ends, which require no lubrication or maintenance, allow for the pivoting movement of a wok and ingredient boxes, making them self-aligning.

The final piece to the food-production puzzle is a triflex multi-axis cable carrier that can move in three dimensions and has a retraction system mounted in the robot arm.The triflex cable carrier is a frequent component of automated solutions, as it offers superior service life, reliability, and easy assembly.

Other applications that use the triflex component include welding, material handling, machine tool manufacturing, and even medical robots.

Emerging trend
The application with RoboEatz is one of many in which igus is helping businesses find robotic solutions. Companies are increasingly finding that automation can help their business grow while reducing labor costs.

“Every industry, including agriculture, construction, retail, and hospital is now looking at how they can take advantage of robotics to make their companies more successful,’’ said Alex Shikany, vice president of membership and business intelligence of the Association for Advancing Automation.

The rise of automation is reflected in industry statistics. A report in May from the Association for Advancing Automation said North American companies purchased the most robots ever in a single quarter in the first three months of 2022.

“As robots continually become easier to use and more affordable, we expect to see adoption continue to rise in every industry and at companies of all sizes,’’ said Jeff Burnstein, president of A3. “There are hundreds of thousands of companies in North America who have yet to install even one robot.”